Ocean Springs – In 1971, a group of dedicated citizens formed the 1699 Historical Society in order to preserve and celebrate the unique culture and history of Ocean Springs and the surrounding Gulf Coast.

Every spring, the Society stages a dramatic reenactment as the showcase of its annual “Weekend of Discovery.” The event brings to life the April 1699 story of Pierre LeMoyne Sieur d’Iberville and his armada of ships sailing into Biloxi Bay. Commissioned by King Louis XIV to explore the shores of the upper Gulf of Mexico, he and his expedition crew first discovered Ship Island before stumbling upon a high, defendable bluff, known today as Ocean Springs, Mississippi. Stopher Haug, chairman of the event this year, believes it’s important to help the public realize the significance of the landing. “I think that the culture and the heritage and influence that the d’Iberville landing had on the Gulf South in 1699 is essentially equivalent to the Jamestown landing in the Northeast back in 1603,” said Stopher. “So we’ve worked hard to try to get that message out and bring the history to life.”

The weekend kicks off Friday night with the Mary C. House Party featuring the Mardi Gras Indian Collective from New Orleans. Admission to the event is free, but donation opportunities abound with a full bar, art auction, and a Rock-Paper-Scissors tournament. Festivities resume Saturday morning and include a 5K race, kids fun-run, paddleboard races, pet parade, a regatta at the Ocean Springs Yacht Club and will wrap up with the 1699 d’Iberville reenactment. Haug says he hopes everyone goes back home having had a great time at the event, but also with a greater knowledge and appreciation for the significance of the 1699 landing. “One thing that we would like folks to be aware of is that we’ve partnered with the Vancleave Live Oak Choctaw, who descend from original native Americans that were here in 1699. We’ve been working with them to try and bring more authenticity and historical accuracy to the reenactment this year and to recognize their culture and contributions as well.”

Everyone is invited to join in this exciting time and become a part of this commemorative celebration! 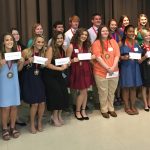