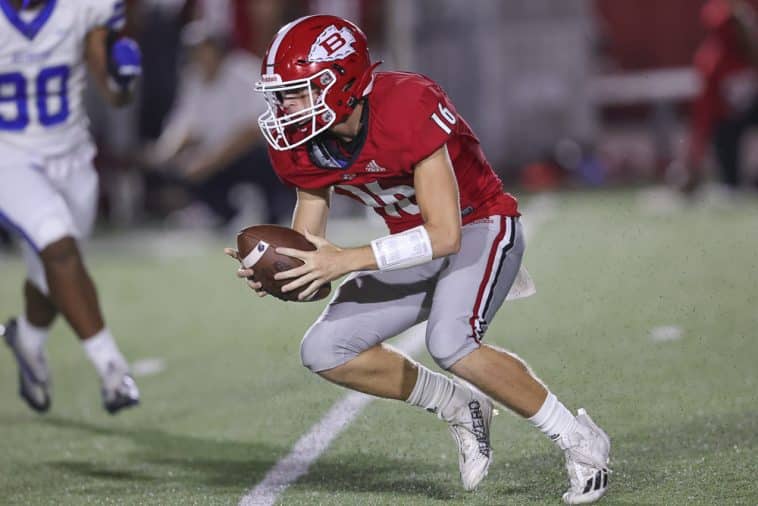 October 6, 2022: Biloxi Zachary Marlin (16) recovers his own fumble and runs up the middle during the Ocean Springs versus Biloxi game at Biloxi, Mississippi. Photo: Bobby McDuffie/228 Sports
Biloxi came into Thursday’s home Region 4-6A match-up against defending league champion Ocean Springs somewhat surprisingly tied with the Greyhounds at 2-0 atop the region standings.

It didn’t take OSHS senior stand-out signal-called Bray Hubbard long to change all of that, however.

Hubbard accounted for four first-half scores, throwing three scoring strikes and running for one touchdown, as the Greyhounds won their 16th consecutive regular season game and remained unbeaten at 6-0 on the season with a  48-28 win.

The win moves OSHS to 3-0 in league play, as they shared the top spot in the standings with Gulfport.

Hubbard hit stalwart wide receiver J.P. Coulter on a pair of touchdown tosses early in the game as the Greyhounds took a quick commanding lead they would never relinquish. He hit Coulter on a 39-yard throw seven plays into the game, and then followed that up with a 16-yard fade route for a 14-0 lead six minutes into the game.

Will Gray then added a three-yard scoring dash less than two minutes later, as OSHS took a 21-0 lead heading into the second stanza.

Hubbard himself kept on a two-yard sneak to make it 27-0. He then hit Christian White on a 28-yard scoring pass to wrap up the first-half scoring for the visitors.

Biloxi got a short scoring run from Damaryion Fillmore and also scored on a bit of a trick play on a 4th and 8 situation from its own 16 just before halftime as Troy Suddeth pulled in a lateral from Indian quarterback and hooked up with Tristain Haynes on an 84-yard scoring pass to make it 34-14 at halftime.

Biloxi is now 2-1 in region action.

Speaking of Gulfport, the Admirals sailed into Brett Favre Field in the Kiln to take on home-standing and upset-minded Hancock and took care of business with a solid 41-6 win.

Standout GHS running back Emmanuel Bentley recorded a pair of touchdown runs in the first half, and quarterback Jacob Palazzo hit Tavaris Henshaw on a 10-yard touchdown toss as well to put Gulfport up 21-7 at halftime.

Gulfport remains tied with OSHS at 3-0 in the league race and the Admirals stand 5-1 overall with their only loss coming to mighty Picayune. Hancock meanwhile, coming off of a big 14-point win over Hancock last week, drops to 1-2 in league play and 4-3 overall.

And speaking of St. Martin, Harrison Central moved to 2-1 in Region 4-6A action with a 28-14 win over the visiting Yellow Jackets at Earl Phillips Stadium in Lyman Thursday night.

Also in Region 4-6A action Thursday night, D’Iberville pulled out a 44-37 win over homesteading Pascagoula in double overtime at War Memorial Stadium.
Warriors quarterback Gage Peterson scored the game-winning score on a one-yard sneak in the first possession of the second extra session. D’Iberville then turned the Panthers away on four downs to pick up the much-needed win.
Pascagoula led 27-7 in the third quarter. D’Iberville kept its playoff hopes alive moving to 1-2 in league play and 2-5 overall and also snapped a five game losing streak in the process. The Panthers fell to 0-3 in league play and 2-4 overall. 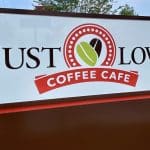 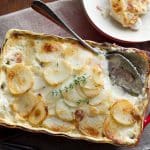