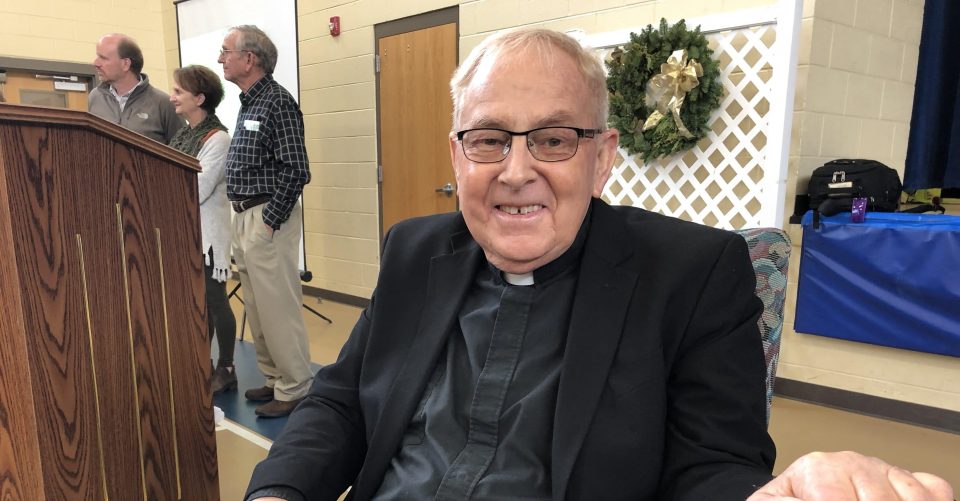 Father Michael Kelleher, or Father Mike as he is affectionately called by parishioners and students, retired after spending 22 years as the pastor of Sacred Heart Catholic Church and Resurrection Catholic School in Pascagoula.  But if you had asked him about it before he assumed his duties there, he would have probably said he wasn’t overly enthused at the idea of coming to Sacred Heart.

“I was familiar with the situation in the parish having a very active school and parish with all the attendant challenges, financial and otherwise, but the late Bishop Howze, in his own persuasive way, told me I had to apply for the parish.”

He was the only one who did apply. And for more than the past two decades, those who know and who have known him, and those who have been guided and counseled by him, are truly blessed that he did.

Father Mike remembers his arrival at Sacred Heart in the midst of world sadness.

“It was September 1997, as St. Mother Theresa and Princess Diana were being laid to rest. I remember vividly so many of the children and some of the teachers being very distraught watching Princess Diana’s funeral.”

Prior to his arrival, the late Roland Mestayer, Jr. and the late Jack Oppie invited him for lunch to welcome him and to share a profile of the parish and to give him a “heads up” on some of the pressing needs. At the top of their list was the urgent need for a new parish hall. He didn’t realize that for the next 20 years a big portion of his pastorate would revolve around the discussion of buildings, construction, repairs, etc., starting with the urgent repair of the school cafeteria and the “tearing down” of the old Sister’s Convent.

No sooner had that been accomplished when Hurricane Georges came along and did considerable damage to all the parish structures, resulting in his having to vacate the Rectory for the better part of a year while repairs were made. He moved into a parishioner’s house about six blocks away.

“During that time I enjoyed riding my bicycle back and forth to the church and school. Some of the local students also rode bicycles to school. I felt a kinship with them, especially when having to park my bike in the school bicycle rack.”

In May 2001, Bishop Thomas Rodi was appointed Second Bishop of the Diocese of Biloxi and he had a plan to revitalize all the schools in the Diocese and that plan involved an ambitious Diocesan-wide financial drive to benefit all the schools. It also included the closing of the high school campus of Our Lady of Victories (which is the location of Resurrection Middle and High School) because of a serious asbestos issue and which was in bad need of repairs, and it also meant the relocation of Resurrection Elementary to Sacred Heart.

During this time there were many meetings and discussions involving the neighboring parishes, and the whole idea was very controversial with the OLV representatives.

“They were very much regretting the closing of their school. But again, Mother Nature intervened and Hurricane Katrina put an abrupt end to all plans on August 29, 2005.”

As the weeks, months, and years passed after the chaotic destruction of Katrina, and with the revival of Bishop Rodi’s plan for the schools, soon it was back to serious discussions of buildings. As a parish, Sacred Heart bought a parcel of land adjacent to the school that would benefit the parish and school for future years. Plans were under way to build a $5 million complex inclusive of an activity center, gymnasium, classrooms, computer room, music and art rooms and a state of the art library. The center would be called the Delmas Activity Center, recognizing the contribution of Catherine Delmas (1885-1981) who opened her home back in the 1930s and gathered the nucleus of the original Sacred Heart community.

Also devastated by Hurricane Katrina was St. Peter’s Catholic School, whose entire grade school was incorporated into the new Resurrection Elementary School. With financial help coming from Bishop Rodi’s revised campaign and a $1.7 million grant from FEMA, which followed the students from St. Peter’s, and some savings from the Sacred Heart parish, the ambitious Delmas Activity Center began and was completed three years later. On May 8, 2011, the Grand Opening was officiated by Bishop Roger Morin with Archbishop Rodi in attendance.

Father Mike says that probably the most significant lesson he learned during that experience was the generosity and cooperation of so many talented people who are too numerous to mention.

“I came to realize what a true honor and pleasure it was to be pastor to these people. It was alive and dynamic due to a great school – the influx of many Latinos, and the challenge of meeting their needs and trying to build an integrated community. I saw my role as pastor as that of a diplomat between the parish, the school, the Latino community, and when I experienced the cooperation and growth, which was sometimes hidden, along the way, I knew and felt the powerful presence of the Holy Sprint in my priesthood.”

Father Mike was ordained on June 13, 1965 in Thurles, Ireland, for the Natchez-Jackson Diocese, and arrived in Mississippi on August 31, 1965. Since then he has been Associate Pastor in five parishes – Nativity Parish (Biloxi), Our Lady of Victories (Pascagoula), Annunciation Church (Columbus), St. Therese Church (Jackson) and St. Mary Cathedral (Natchez) and been Pastor for three parishes – St. Peter’s (Bassfield), St. Mary’s (Gautier) and Sacred Heart (Pascagoula).

“I can honestly say all of them were wonderful assignments. Looking back now over the last 53 years, I know that it was the welcoming and the friendliness and the generosity of the people in every place that helped me grow into the person I am today. If I may brag a little, I think I do meet people easily, and I enjoy their company and when I experience “openness” I know the Grace of God is at work. I can’t say that I will miss being Pastor, but knowing that “administration work” will not be part of the scene will be welcomed indeed.

Bishop Louis Kihneman, Bishop of the Diocese of Biloxi, calls Father Mike’s service at Sacred Heart and RCS a great blessing for the school and also for him.

“That’s really what it’s about. To be the spiritual father of all those folks, to guide them and lead them. It’s a great blessing for his life and the life of the parish,” Kihneman said.  “He’s felt very close to the people, to the families and children, and very close to the school especially. He loves the school and he’s going to continue to come over and help out.”

To the people of Jackson County, RCS and its staff, Bishop Kihneman would say that “we have a really fine school very committed to quality Catholic education. We’ve been working hard together with the faculty and staff, Mr. Frederic and Mr. Hamilton especially, and all of those who help and who are super supportive of the school.  It really takes a community of believers to make a Catholic school go. And we have a strong community of believers here at the Sacred Heart parish, and also at Our Lady of Victories, St. Peter’s, and the surrounding parishes in the surrounding towns. So it’s been a great tradition that we’re all committed to continuing in a big way.”

Bishop Kihneman says Father Mike has put his stamp on Resurrection in a big way – 22 years’ worth. “It was a blessing for the community that he stayed that long because that’s rare. You don’t get to stay that long usually in a parish assignment.”

Noah Hamilton, Principal of RCS, says that Father Mike has been everything the students have needed.

“Not all of the students are Catholic and yet he treats them all as though they’re his. He’s loved them, he’s been with them when they’ve cried, and he’s talked to them when they’ve had bad things, good things and middle ground things happen.”

Hamilton is appreciative of the support that Father Mike gave him when he came in as the new school administrator.

“I’d been a public school administrator, but never a Catholic school administrator, and he helped me really get my feet on the ground and kind of figure things out, and he’s never backed down. He always told me that if you’re doing what God has called you to do, if you put yourself in that position, you open yourself up to the Holy Spirit and allow Him to work through you, and nothing else matters.”

As beloved as Father Mike is, it was only natural that it was standing room only at his last official mass. Hundreds of people – parishioners, and students and guests – filled Sacred Heart church to celebrate the day with him.

Following the mass was a retirement luncheon in the gym of Delmas Activity Center. Father Mike knew about the luncheon, but he didn’t know what the students in attendance had planned for him. They had been asked to wear their mass day dress and line the sidewalk from the church to the gym through which Father Mike would walk as they cheered him on.

Inside the gym, while dining on delicious food donated by parish members, attendants were treated to a video slideshow of Father Mike with students at various school events and ceremonies over the years. Everything from weddings, to baptisms and first communions, to school activities such as sporting events, Mardi Gras parades, and other celebratory occasions. Several students, and even a recent graduate, read essays on what Father Mike meant to them. There were also songs by elementary students and by members of the St. Peter’s choir. Father Mike was gifted a large wooden cross which was signed by guests prior to attending mass. And, in a kind of full circle moment, Father Mike was presented with commemorative plaque indicating that the parish hall would from that day forward be known as the Father Michael Kelleher Sacred Heart Parish Hall. Yes, the same parish hall that 22 years earlier he’d been told was at the top of the list of things the parish urgently needed.

Now that he is retired, Father Mike will remain in Pascagoula, and health permitting, he will still be a part of the parish and the school.

“A few years ago, as I was riding around the parish and thinking about my future and my options and where I was going to spend my final days, it suddenly dawned on me that I love Pascagoula – the people, the climate, etc. and I would be foolish to leave the area. So after some research and by the Grace of God, and maybe the Luck of the Irish, this beautiful little house came available on the market and I was able to purchase it for my retirement. I named it “Tír na n-Og” which means the land of youth in Gaelic.”

Father Mike has made quite an impact on the lives of those around him, not only on Sacred Heart parish and the local community, but also on RCS on the multitudes of students who have passed through its halls starting out as preschoolers and ending up as graduates.  Anyone who has crossed his path has been truly blessed. Father Mike is one of a kind and in the words of Principal Hamilton – 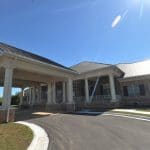 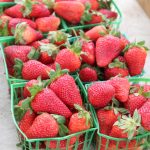