Owls are quite beautiful. Many sport brown, red, gray and white feathers in an array of patterns. Snowy owls are completely white, but they are not a common site south of Canada. Seeing a white owl in our part of the world is, therefore, a reason to take a second look.

That was exactly what Tim Savage’s neighbors did a few weeks back when a white owl was spotted in his backyard in Escatawpa. This bird is either an example of albinism, a rare condition of complete lack of pigment in body parts, or leucism, a partial loss of pigmentation. The final determination has not been made.

Either way, this bird’s condition is rare and worthy of reporting. This bird was identified as a juvenile Barred Owl, a common species found across North America. Sadly, this bird was in poor health when captured by Alison Sharpe of Wildlife Care and Rescue Center. Although Alison did what she could, this bird died soon thereafter.

Juvenile birds naturally have a high mortality rate, but this bird’s color was likely not helpful. White birds stand out, and for a species that is normally darkly colored, are more susceptible to predators that may kill or hurt them. This bird may also have not learned to adequately feed itself. But not all albino birds perish. Albino hummingbirds are commonly reported and seem to fair well.

As sad as it is that this bird did not survive, my main message here is about the fact that this bird was seen and reported. Reporting oddly colored, albino, or leucistic birds or other animals is important to the scientific world, that often depends on sightings by the general public.

This is one more reason to keep an eye out for the oddities that can appear in your backyard. For birds, these observations can be reported to the Mississippi Coast Audubon Society ([email protected]). A photo is always a plus, but members of this group are happy to visit to confirm and document your findings.

Thanks to Tim Savage for reporting this bird and Brian Johnston for photos and documenting this finding. 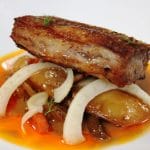