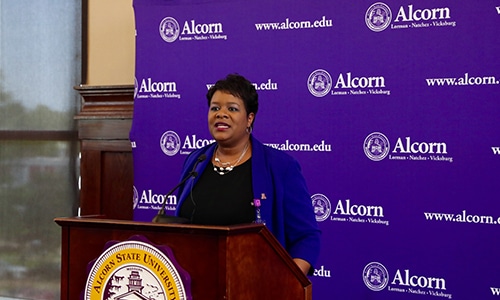 The National Diversity Council honored Dr. Felecia M. Nave with its 2021 Top 50 Leaders in Higher Education during the virtual 17th annual National Diversity and Leadership Conference April 21-22 and April 28-29, 2021. This year’s theme was “Be a Changemaker.”

Nave is Alcorn State University’s 20th and first female president. Her exceptional student-centered leadership has resulted in nationwide recognition, on numerous occasions, and has positioned the university for future success.

The National Diversity and Leadership Conference recognizes individuals who contribute to the growth of their students, organizations, community, and are active in mentoring the next generation of professionals in the education sector. The Top 50 Leaders in Higher Education are innovators, strategists, and pioneers in the dynamic sector of local and global education.

“It’s an honor to be named among some of the country’s leading educational professionals,” said Nave. “Educators play a critical role in the holistic development of our future leaders, so it is important to recognize those who mentor the next generation.”

Nave’s approach to leadership ensures students have the space and freedom to find their true purpose and reach their greatest potential. While deeply committed to academic excellence, she is equally devoted to an approach that nurtures the whole person.

She often attributes her success to the examples set before her – to which her response is to carry on a tremendous legacy of progress and ensure future generations of Alcornites do the same.

As the University celebrates its 150th anniversary, Nave paid homage to Alcorn’s rich history of trailblazers and barrier breakers who paved the way for her and others to rise to the top of their respective fields. She’s thankful for their sacrifices and examples of hard work.

She shared, “This honor goes down with many other achievements that have been reached by Alcorn professionals over its 150-year existence. Alcornites have become synonymous with excellence, and I feel that had it not been for their success and examples, I wouldn’t be where I am today. I credit all of my accomplishments and accolades to Alcornite leaders who were brave enough to create avenues for people like me to excel.”

Founded in 1871, Alcorn State University is the nation’s first public, historically Black, Morrill land-grant university. Alcorn State offers bachelor’s, master’s, and doctoral degrees in more than 50 top-degree programs. Located on 1700 acres in Lorman, Mississippi, with branches in Vicksburg and Natchez, the University is celebrating 150 years of academic excellence. In addition to its generous scholarship opportunities, Alcorn has earned nationwide recognition in nursing, biology, music, technology, agricultural research, and the liberal arts. Outside of the classroom, students are involved in NCAA Division I athletics as well as more than 65 organizations and clubs, including student-run radio and television stations, study abroad, and the 200-strong Sounds of Dyn-O-Mite Marching Band featuring the Golden Girls. 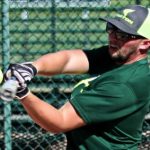 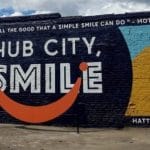