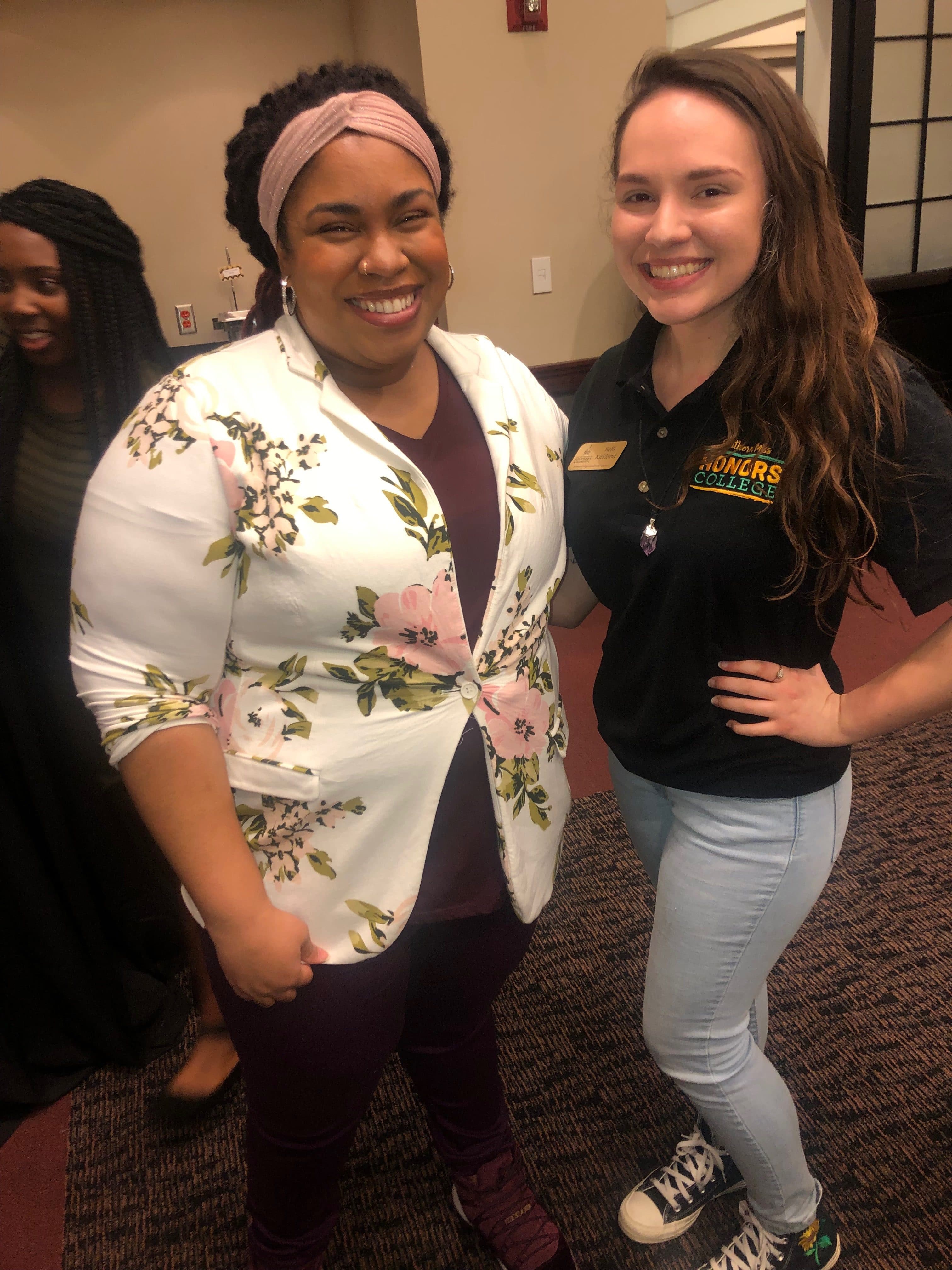 At University Forum, Southern Miss gathers speakers to give talks and answer student questions. Previous speakers include Samantha Fuentes and Tena Clark. On Feb. 11, the guest speaker was Mississippi’s own Angie Thomas, who wrote both The Hate U Give and On the Come Up, both New York Times Bestsellers. Many students on USM’s campus, including Honors Scholars and Luckyday Scholars, were assigned On the Come Up as a common read that everyone must complete. This, combined with the fact that Thomas is well known for her first book which was adapted into a movie, made for a large turnout.

In Thomas’ writing, there is a common theme of class struggles, race struggles, and misrepresentation. Growing up in Jackson, Mississippi, she was not shy to say that much of her inspiration came from her own life experiences. In fact, she shared that she struggled to relate to books growing up, as she never saw representation of her own life within them. Eventually, Thomas wrote the representation that she wanted to see, herself.

Before she even set foot on the stage, she was given an introduction by a professor, who revealed that her students connected with her books and felt represented – some for the first time. She set up the theme that representation matters, especially to youth.

When Thomas came onto the stage, greeted by applause, she immediately made a joke about almost tripping on stage. She is a great speaker, and made certain parts of her talk humorous, despite the inevitable heavy topics that she discussed. Soon after the talk began, she made it evident via slideshow that her topic was mainly going to be “Making the Political Personal.” She eventually decided not to use the slideshow due to technical issues, but it didn’t lessen the topic nonetheless.

Thomas began by sharing her experience being a Mississippi writer. She revealed that there are two main reactions from peers when she speaks about where she is from – there are those who vaguely know of it in a positive way and those who know of it in a slightly misconstrued way.

“Our state has a reputation,” she continued, making light of the misconceptions. “We have indoor plumbing… we do wear shoes.” She proceeded to speak a bit about shoes for a few moments before transitioning into a more serious topic.

She then spoke about her own neighborhood, Georgetown – one that inspired the making of the Garden (or Garden Heights), where her main protagonists’ stories take place. It was a generally low-income neighborhood, and Thomas shared how she grew up hearing horror stories about the danger. For example, she recalled a story her grandparents had told her about Medgar Evers, a civil rights activist with ties to the NAACP who was shot and killed in the very neighborhood that her parents resided. It was said that her grandparents heard news of issues with the KKK, and stayed indoors that whole night. They could even recall the sound of the shots that killed Medgar Evers.

She told another story regarding Emmett Till, a fourteen year old person of color who was brutally killed after being accused of offending a white woman. She recalled that she was six years old when she discovered this from a picture in a magazine, and she told the conversation with her mother regarding it as follows: “What is this?” to which her mother replied, “No, who is this?” She explained that once she understood the situation, it upset her deeply, as if it was someone she had known, because it was possible that it could have been. Thomas made the connection that those feelings of empathy are what can make politics personal.

Thomas then moved on to speak about rapping and hip-hop, something extremely personal to her and something that her main character is passionate about in On the Come Up. She explained that she always felt that people would always speak about Mississippi’s past and how it has changed, but most neglected to recognize that there were still issues in the present. She felt that rappers and hip-hop artists were some of the only people willing to speak about current issues.

“Rappers told me a story I could connect with,” she told the crowd, making a connection as to why she related to music but not to books growing up.

One of her favorite and most loved artists was Tupac Shakur. She revealed that listening to him felt like the “first time I felt recognized, seen, and heard.” She respected not only him but also his mother, who went no further than a high school diploma but still managed to represent herself in federal court from her own learning.

“When he said those words, he was speaking to me,” she said, explaining the connection she felt with his lyrics. “Visibility is a powerful thing… reminds us of our value.”

Moving on, she spoke about another experience that she had in common with her stories’ protagonists: going to a school that is a “different world” than her neighborhood. While she grew up in a struggling neighborhood, she felt that her school, Bellhaven, was formal and created an environment she was not used to. It was at this point in the conversation that Thomas brought up the term codeswitching. She described codeswitching as creating another personality for yourself in order not to appear different or be stereotyped. “I was trying to be a different person,” she said bluntly. Later on, in response to an audience question, she said: “Codeswitching… becomes a survival tactic and not just a tool.”

Her specific experiences include being the only person of color in creative writing. Therefore, that led to her being the only person of color at the creative writing Christmas party, where she unknowingly picked a Secret Santa gag gift that contained a “drug dealer starter kit.” Someone who she described as “the real life Hailey,” as she inspired one of her book characters by the same name, made a crude comment and attempted joke that “the black girl from the ghetto” received the drug dealer kit.

Thomas recalls leaving the party furious, but she revealed that she also felt angry with herself for staying silent.

She recalled another instance with “real life Hailey” in which she was unaware where Thomas lived and said, “We cannot go over there, that’s where the criminals live!” These were the types of experiences of prejudice she had while attending school.

Thomas again moved the conversation to a broader subject, bringing up the unfortunate death of Oscar Grant, who was fatally shot by an officer while in a defenseless position. She revealed how upsetting it was that people at her school were defending the cop in his actions, and how Oscar inspired a short story featuring two of her characters in The Hate U Give before it was fully developed as a novel. She then dove into the politics of the situation, revealing that sometimes even her existence as a woman of color felt political.

Thomas is a huge advocate for empathy – understanding another’s struggle on a personal level. As she said, “Empathy is more powerful than sympathy.” Connecting this to her books, she explained that books can make you feel empathy, as you spend hours reading in the perspective of someone different than you. This also connects to the theme that representation matters.

“You don’t have to write a book to be an activist,” Thomas said, acknowledging all of the platforms for sharing ideas. “You must define your activism… we need you now more than ever.” She then spoke directly to college students, reminding them of their worth and capability to enact change.

“You are some of the most powerful people in the world,” she said. She spoke about how many corporations will spend money to see what the youth, in general, thinks. She made the connection that companies need us to remain successful. “That’s how much they value your opinion.”

She encouraged the audience to register to vote, as it is an important thing that people must do to see their own opinions make a difference. “You are a force of nature,” Thomas told the audience. “Why not use that power to change the world?”

“Use your privilege, if you have it.” She then continued to explain how one can be aware of their own privilege, and she concluded that if you have never had to have a serious talk about danger in society and how to protect yourself if you are ever questioned, then you may have a privilege that some others do not.

Near the end, she connected politics to something personal. Thomas encouraged her audience to take things personally, as that is what will inspire them to make a difference. Finally, to end the talk, she concluded with a powerful statement and reference to one of her book titles:

“The power you have is stronger than the hate they give.”

As a student, I am grateful that Angie Thomas was able to come talk to us. She was funny and relatable, yet dealt with real and serious topics that people may have needed to hear about.

Before her speech, I was able to meet her and ask if she had any comments or insight that she wanted me to include (and, of course, get my copy of On the Come Up signed) and she said that I should write it how I want to write it, and that I’ve “got this.” That encouraging interaction alone, I feel, is a good summary of the Angie Thomas University Forum. 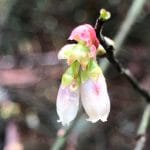 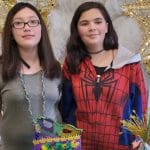