I have been writing about food for a long time, and, as you might guess, food, restaurants, and recipes make up a big part of my life. I am always looking for something new, but I also get stuck on an old favorite sometimes and just can’t let it go. It’s usually seasonal, so with fall approaching I have been thinking about gumbo and jambalaya quite a bit lately, but what’s really been on my mind is chicken and dumplings.

My paternal grandmother was known for her chicken and dumplings, and way back in those days, the chicken came from the backyard. My mom was good at it too, and of course, made everything from scratch. Chicken and dumplings is not a complicated dish to make, but I am intimidated by the dumpling part. I am not a baker and, as simple as it may be to make, any kind of dough puts me off.

I am not much for taking short cuts, it more often than not leads to something not as good as it should be, but I really was craving chicken and dumplings. I did use several short cuts, but it turned out pretty good. I started by buying a rotisserie chicken from Rouses (I think they have the best). I de-boned it and added the bones, along with an onion, bell pepper, jalapeño to two containers of chicken stock, I seasoned it with Tony’s and red pepper flakes and simmered it for an hour, tasting a re-seasoning several times. I strained the stock, added the chicken back to the stock and continued to simmer for a few minutes.

I know a lot of the better cooks out there are going to be rolling their eyes at this, but I made the dumplings by pinching small pieces of canned biscuits and dropping them into the simmering stock. I have used Bisquick in the past, but canned biscuits seemed easier. I simmered it until the dumplings were tender, added a little butter (because everything is better with butter), and I have to say I was well satisfied with the results. I am not sure I would serve it to guests, but for a quick dinner on an almost fall day, it was just fine.

I have a friend who is allergic to chicken, so I think next time I make this recipe, I am going to use turkey instead of chicken, that way I can share with him. As I have said so many times before, sharing food is fundamental to the human experience and I get a great deal of satisfaction sharing food with others. 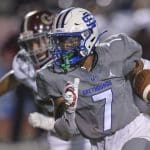 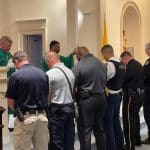