There are a lot of new changes coming to the Gautier Men’s Club this Mardi Gras season.

The 2018 parade, now called the Gautier Mardi Gras Night Parade and Block Party, will roll at 7 p.m. on February 3rd. The parade will be taking a different route-beginning and ending at the Dolphin Road Roundabout. The route goes from the roundabout, east on Dolphin Road, then south on Gautier-Vancleave Road. The route then takes a right onto U.S. 90 and then takes a right back onto Dolphin and ends at the roundabout for the block party. The parade theme this year is ‘Get Funky’.

There will be a pre-party tomorrow night for people who have reserved their spots, but the main block party will happen after the parade on Saturday. The block party will feature live music from 8 to 11:30 p.m. with a high school battle of the bands, including the Mississippi Gulf Coast Community College band.

Since its inception, the Gautier Men’s Club has helped Gautier and surrounding communities by donating time and money it raises throughout the year. Among its annual projects are the sponsorships of families at Thanksgiving and Christmas, including Christmas toys for children.

The club presents awards to the firefighter and police officer of the year, the Gautier Citizen of the Year and annual scholarships to graduating Jackson County seniors. The club’s annual parade is open to all organizations, with each decorating its float based on its own theme. 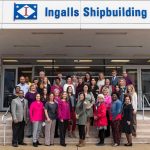