When news of a bombing spreads, fear and anxiety spread, but not was the case in Hattiesburg. The Hub City was met with a beautiful, creative surprise. Earlier this month, part of the Downtown District was turned into delightful surprise. This “bombing” was not one of danger but was a showcase of the talent that graces Hattiesburg.

“The yarn sculptures add the perfect pop of color and quirky flair that downtown Hattiesburg didn’t even know it needed,” Amanda Hargrove, Director of Marketing for the Hattiesburg Convention Commission, said. “The Yarn Blast adds an element of whimsy and intrigue that is truly a must-see for locals and travelers alike.”

Along one of the Downtown District’s more notable place, the area near the Hattiesburg Pocket Museum was adorned with creative, beautiful, and colorful creations designed and created by the Hub City Crafters club. Stairwells have taken on a gorgeous accent, and drainpipes and pvc pipes are hardly recognizable as they resemble animals or beautiful quilts that might bring back memories of days spent with grandparents in a much different time. Water hydrants look like Muppets or Walt Disney creatures and along the alley, the beauty and color meet the eye created by some of the most talented crafters and artisans in the Hub City.

“The Hub City Crafters was started in October of 2011 by Allison LoCicero and myself,” Samantha Clark said. “We had a steady group of regulars meeting every Wednesday night at T-Bones Record Café in Hattiesburg for crafting and conversation. Due to the pandemic, the group has not met in person sin mid-March of last year.”

“I was really missing the camaraderie of the group and thought it would be great to have something we could work on separately but together,” Samantha said. “This year has been so dark in so many ways. We wanted to spread a little light through craft. The Hattiesburg Pocket Museum has been a great source of joy and whimsy during this strange year. If felt like a natural fit to reach out to them to see if we could yarn bomb their alley.”

Of course the museum agreed, and the Hub City Crafters began measuring every pipe, post, and rail in the alley. The club set up a secret Facebook group where assignments were handed out, and inspiration and progress photos were shared. The only rule for crew was to make everything as colorful and fun as possible.

“It was inspiring to see all of the creativity the crafters brought to their pieces—crazy sea creatures, colorful monsters, yarn flowers, a 36-foot long granny-square pipe cover, colorful pompoms, and more,” Samantha said.

It took 34 crafters about two months working on their individual pieces, and installation took about two days and almost 20 volunteers. The installation will stay up through January and maybe February and is not to be missed.

“It has been so much fun seeing people post their pictures with our creations on social media,” Samantha said. “This is such a dark time of year, and I’m glad we could bring a little color and joy to our city’s favorite alley.” 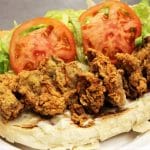 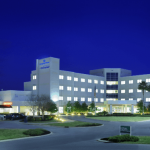