NEWPORT NEWS, Va., Feb. 15, 2018 (GLOBE NEWSWIRE) — Huntington Ingalls Industries (NYSE:HII) reported fourth quarter 2017 revenues of $2.0 billion, up 3.9 percent from the fourth quarter of 2016. Operating income in the quarter was $227 million and operating margin was 11.4 percent, compared to $268 million and 13.9 percent, respectively, in the fourth quarter of 2016. Diluted earnings per share in the quarter was $1.41, compared to $4.20 in the same period of 2016. Diluted earnings per share in fourth quarter 2017 included a one-time expense related to the early extinguishment of debt, the tax expense for the revaluation of net deferred tax assets resulting from the enactment of the Tax Act and the tax expense associated with a $214 million acceleration of discretionary pension contributions in 2018. Excluding these items, adjusted diluted earnings per share1 in the quarter was $3.11. 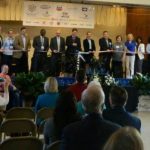