Go to a Pascagoula High football game and sit near Stacy Bodden Inlow, and you realize that she’s really into the game. Talk to Stacy at a meeting or a restaurant, and you’ll quickly find out that this native daughter of Jackson County absolutely knows her football.

See, Stacy comes by this honest, as we say in the South. Born in Pascagoula and raised in Moss Point, she always had football in her bloodlines. Her father Tommy, who many will remember as a Senior Vice-President at Merchants and Marine Bank for many years, was a star running back/defensive back at MPHS, graduating in 1959 and receiving a scholarship to the University of Southern Mississippi. Stacy’s uncle Hugh followed his brother Tommy as a Tiger standout and then on to USM.

When Stacy was a young girl growing up on Dantzler Street in Moss Point—right down from the stadium—her father, when he got home from the bank, would walk down the street to watch Moss Point High practice pretty much every day. Quite often, little Stacy would head down with him to watch the Tigers work out.

“My father was good friends with Billy Wayne Miller, Moss Point’s legendary coach at that time,” said Stacy. “We would discuss what was going on at practice, and he would teach me things that helped me understand the game.

“We had season tickets in Section B, Row 22, fifty yard-line, at Dantzler Stadium. So, every Friday night in the fall, there was no question what we were doing. We absolutely had to get there early so we could see the team warm up—a must even for away games.”

Stacy looks back on those formative years with great affection (“I was probably carried up in the stands as an infant”) and with great appreciation for her father, who passed away in 2005. ( Incidentally, Tommy still holds the Moss Point kick return record of 99 yards. He used to challenge the players at practice that he would give anybody who could break his record a crisp one hundred dollar bill—never had to pay that one off. ) Stacy once ran into a former Tiger player from that period who said, “Aw, you were that little curly-headed girl that sat in the grass and watched us practice with Mr. Bodden”.

“I always thoughts that my dad should have been a coach and that he would have been a great one,” said Stacy. “Players always called him ‘Coach’, and he would be so proud. I loved supporting the Tigers and all their great players with him.”

So it was appropriate that by the time Stacy reached MPHS as a student herself, the Tigers had become quite the force on the gridiron. Her senior year, 1983, Moss Point won the school’s first ever state football championship. Led by quarterback Chris Osgood, defensive lineman Chris Clausell, and other standouts like Scott Bosarge, that group of Tigers started Moss Point’s best era in its football history.

During that run, Stacy’s younger brother Vann Bodden was a star player for MPHS, and he then went on to play on Alabama’s 1992 national championship team. Yep, Stacy was right there observing Vann’s recruiting process and attending most all of his games.

Fast forward to some years later, after Stacy had married and moved to Pascagoula. Sons Will and Matt Inlow played all the sports in the city leagues, and Stacy, of course, was there cheering them on at every game. When the boys were old enough, the family bought season tickets to PHS games, and were regulars at War Memorial on Friday nights. “I would pull for the Panthers unless it was the Moss Point game—caught a lot of looks and was given a hard time for that,” Stacy laughed.

Even that last bit changed when Will and Matt eventually became star players for the Panthers, Will as a tight end and Matt as a linebacker. Both ended up making All-State and garnering numerous other awards along the way. Plus, Will and Matt were standouts on the Panther baseball team as well. Both went on to play in college, and today the two brothers, both USM graduates, are working in the family business, Manning Construction.

As you can imagine, Stacy loved watching her boys play, and became actively involved in supporting the teams. She helped to form the Colmer Middle School Touchdown Club and the Pascagoula Athletic Foundation, where she is currently an energetic board member. She continues to be a regular at Panther games, always at War Memorial when the team is at home, and often driving herself to away games.

“People ask me why I still go and watch and do what I do,” said Stacy. “It’s because I love the kids and the game. Competitive—me? Well, heck yes! When the boys played, some folks would say why don’t you sit with the rest of the moms? I would say because I like to really watch the game. I like to study the other team ahead of time, and do a little scouting.

“As a female involved in what many consider to be a man’s sport, it can be hard because people don’t always think you know things. Some folks have picked at me and said you are the little girl from ‘Remember the Titans’ or the mom from ‘The Blind Side’. I’m just all into the game, the kids, and trying to help them succeed. The biggest reward has been when some of those kids reach back out and say thank you for always supporting me. That means the world to me.”

Coming full circle, Stacy, the classic daddy’s girl, has now been with Merchants and Marine Bank for ten years, presently serving as Administrative Assistant to the President and Executive Team. I can tell you from experience that she’s great at what she does at the bank. However, in many ways, Stacy is still that little girl following her father around at football practice, or that mom pressing up against the fence or leaning forward in her seat at the stadium watching her boys play, and that’s a really good thing, too. 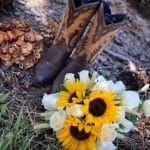 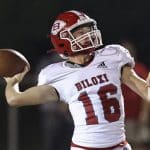