During my time as an English student at Mississippi Gulf Coast Community college, I have had the pleasure of studying under several brilliant instructors – one of whom is Dr. Jordan Sanderson. Dr. Sanderson is a Mississippi native who has been a Jackson County resident for the past ten years; he is also a passionate writer and teacher who inspires his readers and students alike. He earned his Ph.D. from the University of Southern Mississippi in 2007, and after teaching at Auburn University from 2007-2009, he moved to the Gulf Coast to teach for the Jackson County Campus of MGCCC. During his time as a community college instructor, he has won multiple prestigious awards including the 2010 HEADWAE award.

For Jackson County, he was named the 2012-2013 Instructor of the Year, the 2014 William Winter Scholar, and the 2015 Humanities Professor of the Year. I have had the pleasure of taking several classes over the past two years under Dr. Sanderson, and I recently interviewed him about his life and career. When asked why he chose to teach in Jackson County, Dr. Sanderson explained that he loves teaching for a community college because he is passionate about his students; the small class sizes are perfect for one-on-one communication, and he says that seeing others succeed has become his life’s greatest motivation. He loves teaching in his home state, and he specifically chose to work along the coast because he sincerely enjoys the diversity of our community (as well as living on the water). The estuarian scenery surrounding us is a beautiful form of inspiration, and in the words of one of Dr. Sanderson’s favorite poets, Wallace Stevens, “Perhaps the truth depends on a walk around the lake.”

On the subject of inspiration, I asked Dr. Sanderson to tell me about when he discovered his love for writing. He said that he actually discovered his passion when he was introduced to hair metal/1980’s hard rock music when he was in third grade. The unique lyrics inspired him, and to this day, rock and rap music are two of his favorite genres. Aside from heavy metal music and mother nature, Dr. Sanderson credits one of his greatest sources of writing inspiration to the sense of gratitude that he has for simply being alive. He exhibits an attitude of appreciation to nearly every influence in his life, including his previous USM instructors (such as Dr. Angela Ball), his former classmates (including Mike Basset, Shanti Weiland, and Allision Cambell), his favorite authors (Victoria Chang, Ocean Vuong, James Tate, Dara Wier, Charles Simic, and Ada Limóne – among others), and the literary works that have made an impact on his life (such as the collected poems of Wallace Stevens, Viktor Frankl’s “Man’s Search for Meaning”, and Samuel Beckett’s “End Game”). He is grateful to have the opportunity to be a writer, explaining that it is a powerful experience to be able to create a narrative and help shape the world around you.

During the many classes that I took from Dr. Sanderson, I saw his intense love for literature, writing, and teaching pour into the room and his students; he is passionate about helping those around him to succeed. When asked what advice he would give to aspiring writers, he says to (first and foremost) read – read a lot.) Writers inspire each other and discovering the ideas and narratives of others can be a catalyst for your own imagination. He also says to write as much and as often as you can, and in the process, get used to rejection. Creating your story takes time, trial, and error. Writing as much as possible is essential to finding what works – and what doesn’t. Dr. Sanderson’s goals for the future include completing a full manuscript of his poetry, continuing to improve as both a writer and a teacher, and not wasting any of the time that is given to him. A quote that he likes to live by is from German philosopher Friedrich Nietzsche, and I feel that it is a simple (yet profound) reminder for us all: “He who has a why to live can bear almost any how.” 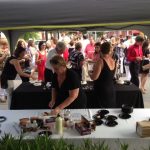 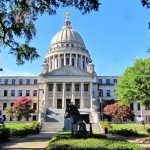