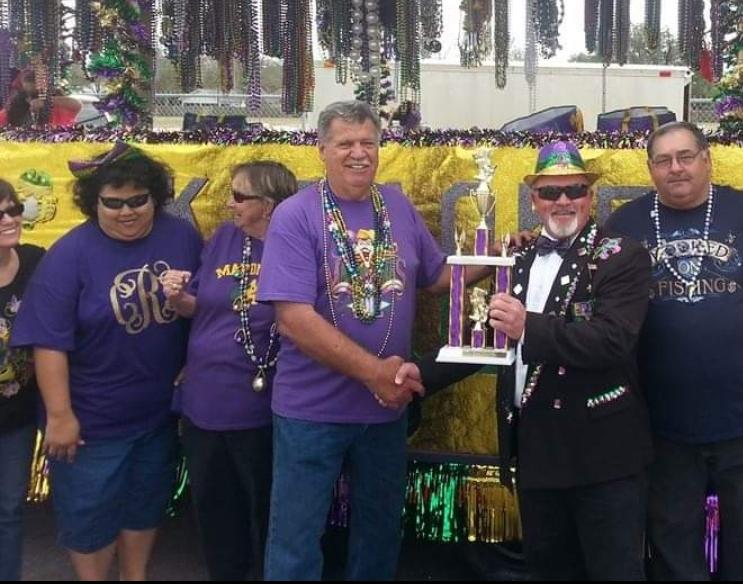 Family bonds are strong within the Redmond family and at no time is that truer than during Mardi Gras.

As a family, they enjoy spending time together, playing cards, having cookouts, singing karaoke, and going to parades.

One day back in 1996, they decided to kick their gatherings up a notch by forming a club and entering a float in the Pascagoula Mardi Gras parade, which was several weeks away.

The float was only a small utility trailer, but it sufficed for the occasion–especially since they had limited time to prepare. Needing a name for their club, they quickly dubbed it “Karaoke Klub” until they could come up with another name, but the name stuck and was never changed. Soon, they had participated in their first Mardi Gras parade and they were hooked.

“We enjoyed the holiday parades as bystanders and wanted to give that same enjoyment to other paradegoers,” Jerry Redmond, the patriarch of the family, said.

Over the years, some members have left the club for health reasons and some have passed away. Other family members have taken their places, but the fun has remained the same.

“The best part about doing the parades is seeing the enjoyment of children and the elderly faces receiving the throws,” Jerry explained.

That small utility trailer has since been replaced with a full-size trailer with built-in walls along the sides. Their list of throws has expanded from only beads to stuffed animals, MoonPies, bags of chips, footballs, Little Debbie snack cakes, lighted necklaces and bracelets, and glow sticks for night parades.

The club usually starts preparing about six weeks to two months prior to the actual parades. At the end of the season, they save leftover beads, if there are any, and collect beads from friends and family to stockpile until the next season. And what items they can’t get from friends and family, they find at thrift stores and specialty stores such as Toomey’s in Mobile, Ala. and the Mardi Gras Supply store in Gulfport.

One thing every club member agrees on: “You can never have too many beads.”

Now, over a quarter of a century later, the Redmonds take pride in the fact that the Karaoke Klub has rolled through every parade in Gautier and Pascagoula since 1996, except for the years 2006 (the year after Hurricane Katrina) and 2021 (when COVID canceled all parades). They have paraded in all kinds of weather from hot to cold and even rain.

Their proudest moment was in 2014 when their float won the Parade Marshall Choice Award for Best Music at the Pascagoula parade.

“We do the parades for pure fun and never expected to be given any reward,” Jerry said.

The Karaoke Klub is just a club made up of family members who enjoyed parades so much they wanted to bring that joy to others. Their advice to anyone considering starting up a club or entering a float is “just do it, have fun, and get plenty of throws in.”

The founding family members of Karaoke Klub are Jerry and Linda Redmond; David and Karen Redmond (Jerry’s brother and sister-in-law); Emma Lou and John Buckler (Jerry’s sister and brother-in-law, both now deceased); and Kathy and Earl Billingsley (Jerry’s niece and nephew-in-law). Eventually, David and Karen Redmond left the group and were replaced by Jerry’s son and daughter-in-law, Dave and Purita Redmond, and after the Bucklers passed away, their spots were replaced by Erin Billingsley (Jerry’s great-niece and daughter of Kathy and Earl Billingsley).

Take a page out of the Redmonds’ book, and laissez les bon temps rouler! 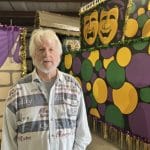 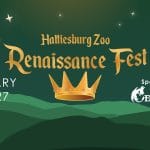