Gulfport – Samantha Schwartz, 17, of Gautier has earned the highest recognition the American Heritage Girls offers to Girl Members, the Stars & Stripes Award. American Heritage Girls, a Christian scouting program, reserves this honor for members who have epitomized AHG’s Creed, Oath, and completed a number of daunting requirements, including earning 16 required badges, serving in a troop leadership position, and passing a board of review. The ultimate challenge Stars & Stripes recipients must accomplish is the service project. Honorees must develop and implement a service project of 100+ hours in their community. Schwartz chose to serve Sue’s Home, a women’s transitional housing program run by Community Care Network of Jackson County. Schwartz’s project involved refurbishing a cabin with freshly-sewn linens, exterior paint, and indoor organization. To pay for supplies, Schwartz organized a charity garage sale and church supper fundraiser. She supervised teams of volunteers for the sewing project and cabin-painting. Schwartz spent a total of 284 hours on her project. Diane Easley, CCN Executive Director, described Schwartz as a “real leader” who “was there from beginning to end”.

As a member of Michael Memorial Baptist Church Troop #MS0408, Schwartz is the first Stars & Stripes recipient on the MS Gulf Coast, fifth in the state and 390th in the United States since the organization’s founding in 1995. The award is the equivalent to becoming an Eagle Scout in Boy Scouts. She was recognized in a Court of Honor Ceremony on April 23 at Michael Memorial Baptist Church in Gulfport. Miss Schwartz has been a member of AHG since 2011 and currently serves as troop historian. Schwartz is a homeschooled eleventh grader, active in several extracurricular activities including Beta Club, Mu Eta Sigma National Math Honor Society, piano and community volunteerism. She is the daughter of Keith and Jennifer Schwartz of Gautier. American Heritage Girls, Inc., is the premier national character development organization for young women, ages 5-18, that embraces Christian values and encourages family involvement. For more information on AHG, visit www.americanheritagegirls.org. 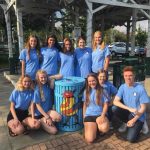