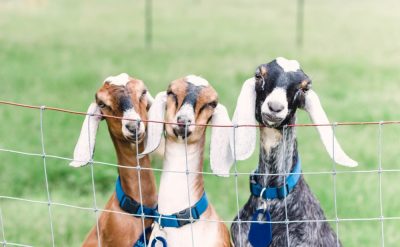 Goats seem to be everywhere these days.  From funny commercials on TV to goat yoga (look it up, you’ll thank me later); goats have gone viral. In addition to the cuteness factor, goats have gained popularity for the milk they provide. Seven years ago, Ken and Brenda Goff of Vancleave embarked on a journey to raise and breed quality milk goats.

The Goffs wanted a self-sustainable lifestyle and spent six months researching what type of goats would be productive for Briarcrest Farm. There are two types of goats: dairy or meat. The Goffs chose to raise purebred Nubian dairy goats because they, “fell in love with the way they look,” according to Brenda. Nubians are a popular goat because of the high butter fat content of the milk. The milk is used not only for drinking, but in products like soap and hand lotion.

During the first year of raising goats, the Goffs found themselves with an abundance of goat milk. After drinking the milk and making cheese and yogurt, Brenda says, “we still had milk coming out of our ears.” Soon, Brenda began researching how to make soap from goat’s milk and was surprised by what she found.

“It’s so good for your skin.  Soap from a store is like rubbing detergent on skin,” remarks Brenda.  “People come several times a week, by appointment, to buy soap. People with psoriasis and acne swear by it.” Briarcrest Farm soap is made from 100% goat’s milk and highest quality food grade ingredients. The soap is handmade through a cold process which maintains the quality of each ingredient.

The Goffs are diligent about the care given to each of the 20 goats currently on the farm. The goats are milked twice daily, and once a month, a sample of the milk is sent to Langston University in Oklahoma for analysis. The results of the testing will be included in the goat’s permanent record, which is then sent to the Dairy Records Management System. The DRMS keeps track of a goat’s heritable traits for future breeding information.

Additionally, Briarcrest Farm goats have earned numerous awards throughout show competitions in the Southeast. With the rise in goat ownership, the Goffs and other owners have started a new dairy association called Southern Browsers. The purpose of the association is to give new or potential goat owners the information needed to properly raise goats.

You may visit Briarcrest Farm at 10401 Cherokee Rose Road in Vancleave to purchase soaps. Appointments are available during weekdays by calling 228. 366.0254 or email: [email protected].  The soaps are also available at the Second Saturday Farmer’s Market in Gautier City Park from 8am-12pm. You can also learn more at www.briarcrestfarm.com and follow their farm happenings on our Facebook page at httpss://www.facebook.com/BriarcrestFarm/ 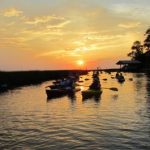