Nutrition storefronts are popping up all over the Coast, offering energy-boosting loaded teas, meal replacement shakes and specialty drinks to customers in search of more energy, less sugar and calories and overall healthy options.

Courtney Plumber opened her storefront, Downtown Ocean Springs Nutrition, just off Government Street in March of this year. She was the third nutrition store on the Coast. Now according to Plumber, there are six of these types of stores in Ocean Springs alone and at least one in most coastal towns.

Plumber says her business has been booming downtown, and she credits the fact that the products taste good and don’t contain sugar. She says the ingredients that make up the products include vitamins that are good for you as well. Her business has grown so much that she is opening a second location in the Edgewater Mall.

She found these products, made by Herbalife, in her effort to kick her Starbucks habit.

“I needed to lose weight so I started with the shake. I fell in love with the products and was eventually told I could open my own store.” Plumber has seen a big difference since she began with shakes and drinks and credits them for her loss of 40 pounds. She still has the occasional Starbucks craving but kicking the extra Starbucks sugar has been a win for her.

Her most popular products include the meal replacement shakes and specialty drinks, which include vitamins, collagen and biotin, and protein. “The specialty drinks are a good hunger suppressant and immune booster, strengthens hair and nails, and the added protein is a bonus.”

In the last month, Ocean Springs Nutrition opened on the east side of town, in the shopping center just behind Whataburger and west of Walmart. The owner, Kay Moore, became interested in the shakes and teas after taking hot yoga and seeing someone from the class with the products. “I started getting the products several days a week, and eventually decided to open my own store.”

Since opening her store, Moore has heard success stories from her customers in regard to the way they feel. One product, in particular, called the donut hole shot, has gained a lot of attention. “It’s a dual-action that happens with prolessa – agents that help suppress your appetite and target belly fat,” she said.  “It has sugar free syrup and cinnamon which helps with digestion.  It’s best when taken seven days in a row.”

In Moore’s store, she’s finding the most popular sellers are the butter pecan and bread pudding shakes as well as the salted caramel and brownie batter. Most shakes contain between 200-250 calories and 5-16 grams of carbohydrates. “Customers are using them as meal replacements, and it’s nutrition on the go, especially in the morning,” adds Moore. Specialty drinks, including her beauty drinks which contain aloe and vitamins are popular as well. They also contain collagen and biotin to help the nails and hair.

Both Downtown Nutrition and Ocean Springs Nutrition have very active Facebook pages that advertise new teas and shakes as well as specials and giveaways.

A North Mississippi native, Alexis has lived in Ocean Springs for over 18 years and is happy to call the Coast home. Having worked in health care public relations and higher education, she now enjoys freelance writing and marketing and owns Shindig Floral Design, specializing in wedding and special events. She's the mother of two boys, a fitness instructor and a graduate of the University of Mississippi. 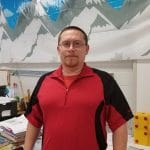