In the holiest time of the year, one man has brought the message of Christmas to everybody around him through his own personal story.

Born in Laurel, David Nicholson, Jr., better known as “Bud” to all that know him, has lived his whole life in the Jones County area and has served as an incredible source of inspiration for many. Diagnosed with advanced Leukemia in October 2020, his oncologist predicted that he only had about two weeks to live, saying that he might not be around for Thanksgiving that year, and she assured him that he would not see that Christmas.

While some might have been devastated by the diagnosis, Bud was upset for a moment but knew that the word of a doctor could not defeat the word of the Lord. “My God is the only one that knows when I will go home,” Bud said. “This is the journey that he has chosen for me, and I will fight it as long as he gives me the strength and will to do so.”

It is that fighting spirit and strong faith that has kept him going two years after the doctors predicted he would not be around. If anything, the illness has made his faith stronger and has led him to positively impact the lives of others. I may be a little partial because he is one of my uncles that has been such a cornerstone to my family after we lost our parents. He and my aunt “Snooky” Nicholson are always there whenever we need them despite any health issues they might have.

But Bud, who just turned 80 years old this past September, is not new to the battlefield. He served about eight years in the National Guard during the 1960s and was a part of many historic events that happened in our state and impacted the world forever. When James Meredith became the first African American to attend the predominantly white college of the University of Mississippi, he was met with such anger and strife from many of the students and people throughout the state. Mississippi was in a state of turmoil. Bud was called into active duty to help protect Meredith as he attended classes. Bud was a part of that historic time and did his part to help bring peace back to the Magnolia State.

During the John F. Kennedy administration, the United States was threatened by Cuba during the missile crisis. Once again, Bud was activated and put on high alert to help protect America from the threat Cuba had put on human lives. But that selfless attitude is nothing new to Bud. He has always put others first, helping his family and community whenever needed.

Married for 60 years to Snooky, the couple is proud parents of two children, David Nicholson and Nancy Nicholson Braddock. Their first child went to be with the Lord as she was stillborn. Despite that tragedy, Bud put his heart and soul into helping many youth throughout the Jones County area when he coached summer league baseball and during his son’s days on the Laurel High School baseball team. He was a major influence and father figure for several of the baseball players, and with giving hearts, Bud and Snooky were always there to lend a helping hand if the youth needed a ride home or something to eat.

That loving devotion was once again tested in 2013 when his wife had a heart attack. She had severe blockages in her heart and was rushed to Forrest General Hospital and was prepared for surgery. Bud never left her side during the whole trying time. When Snooky was in surgery, her heart stopped for 18 minutes, and the doctors were telling Bud and family that they had done all that they could to revive her. Bud was devastated. He had lost the love of his life, but once again, God intervened and Snooky’s heart began beating again. During her long hospital stay and rehabilitation, Bud never left her side and took care of his love as he had done for so many years.

“He is my Superman…my everything,” Snooky always says of her husband. They have treasured every day that is given to them, seeing it as the gift of another day together.

Now, it is Bud that is facing one of the toughest battles of his life, taking several rounds of chemotherapy to keep the Leukemia at bay so that he can live to serve the Lord another day. “I know I’m never walking alone. My God is the one that keeps me going and is the only one that can say when my time here on Earth is done,” Bud said.

He has returned to his roots at Plainway Baptist Church in Laurel, and you will find him and Snooky and family at church almost every Sunday and Wednesday night. It is not always easy for him to get up the energy to come but he is no stranger to battles and is determined to be there at church every chance he gets. For so many members at Plainway, Bud is such an inspiration as they look to emulate his strong faith in the Lord and his positive attitude.

If the whole world had such strong faith and uplifting spirits as Bud Nicholson, there would be much less strife in the world, and the whole year would be a time of peace on Earth and good will toward men, not just during the holiday season. His strength of faith has been a major source of inspiration for me and to so many others as they hear of the amazing story of how God has touched this man’s heart to serve the Lord and look forward to another Christmas season.

“If I’m here another day, I win,” Bud said. “If I’m called home, I still win because I will be with the Lord. It will always be a win for me but I know that I couldn’t do it without the good Lord.”

What better way to get into the Christmas spirit than to hear the amazing story of a life that has been touched by devastation, but strong faith has gotten him through every battle of his life. 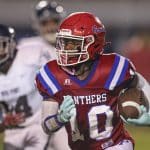 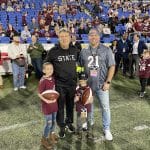