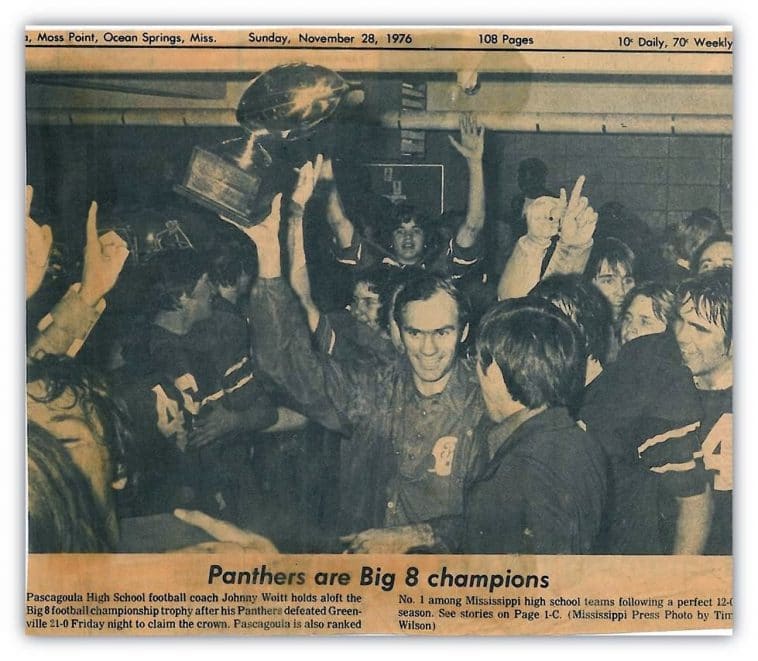 That’s exactly what members of Pascagoula High’s 1976 State Championship football team intend to do on October 15, when the group will hold a 45th Reunion event centered around Pascagoula’s game with Ocean Springs that night at War Memorial Stadium.

All former players, coaches, and managers from the ’76 squad are asked to be at the historic stadium by 6:15 and to be ready for an on-field ceremony at 6:30. Later that evening, there will be a gathering at the Jury Room in downtown Pascagoula (702 Delmas Avenue).

There is no doubt that the 1976 Panthers rank as one of the very best teams ever produced by this sports-centric city (for that matter, one of the best ever in the state). Coached by Johnny Woitt, a former PHS star and now Pascagoula Athletic Hall of Fame member, ‘Goula went 12-0 and outscored the opposition 303-67.

The team was led by running back Rooster Jones, the state’s player of the year. Jones had been a local prodigy since his junior high days (“wait’ll you see this guy”), and his senior season was the culmination of a great career. In 1976, he ran for 1,895 yards and scored 28 touchdowns. To these eyes, he was the best high school football player I have ever seen, and I’ve been watching ball since the 1950s.

Jones would be the first to tell you that the ’76 championship was very much a team effort. Quarterback Guice Smith was a savvy operator and effective team leader. Fullback Ricky Conerly was a tremendous blocker and a very good runner himself. The offensive line, led by Marc Massengale, was outstanding.

“We were successful in part because we had a high number of players and coaches who had already experienced championship-level success by the time we started two-a-days,” said Massengale. “We had coaches who had played at a high level—Coach Woitt, for instance, had played in the SEC and the NFL. We also had players who had excelled earlier in sports locally. We had four guys who had played for the Pascagoula Dixie Youth team that won the World Series. It was a good mix.”

Defensively, the Panthers in 1976 were, if anything, underrated, due to the explosive offense. Linebackers Ricky Rozzell and Mark Brown were intense and skilled. The late Waldo Thornton was a rock on the defensive line, and Stacey Carmichael was exceptional there as well. The defensive backfield was led by future NFL star Lynn Thomas, former PHS baseball coach and present Hall of Famer Johnny Olsen, and the opportunistic Roderick Buford.

“In addition to the obvious stars, the defense had a bunch of so-called no-name guys who were not particularly great athletes but became terrific players,” said Massengale. “Coach (Cooper) Hogue, our defensive coordinator, made them into mean monsters on the field, guys like Kurt Schoenberger, Hoppy Cole, Kelly Cochran, and Bill Adams.”

Even though the Panthers were pretty dominant over the course of the season, there were some tough challenges along the way. In a mid-season battle of the top two teams in the state, Pascagoula beat Gulfport East 23-21 in a real barn burner (Pascagoula also had some pretty phenomenal stretches during the run. Check this out: in a four week period in October and November, the Panthers beat Gulfport 43-0, Meridian 35-0, Biloxi 28-0, and Hattiesburg 22-0. That’s four other traditional Big Eight powers/rivals crushed by a total of 122-0).

Significantly, PHS had to beat North Natchez twice: 28-6 in the regular season, and 12-6 in the state semifinals. This Natchez team included linebacker Hugh Green, who eventually was an All-American for the University of Pittsburgh, came in second in the Heisman Trophy balloting in 1980 (should have won), and became a multi-year All-Pro in the NFL; running back James Berry, who made All-SEC at Tennessee; and wide receiver Danny Knight, who went on to star at Mississippi State. Yeah, they had some dudes. After that semi-final win over North Natchez in an instant classic, the 21-0 victory over Greenville in the championship game seemed almost anticlimactic.

Listing all those top-level teams and players Pascagoula had to get through shows how impressive that 12-0 year really was. Of course, the Panthers were loaded themselves: Rooster, Lynn Thomas, and Pappy Thomas also went on to excel at Pittsburgh; Massengale and Cole were very productive at Ole Miss; Rozzell signed with Alabama and Brown with Mississippi State. Many others also played at various colleges and junior colleges.

“I tend to think that this group of coaches could see what they had by way of raw talent and potential, then they did an outstanding job of molding us together,” said Massengale. “One common theme that gets mentioned without fail at all our reunions is this—they ran us to death at practice. We even ran a ceremonial 40-yard sprint at the end of games as a tribute to the activity that became one of the foundations of our success. Coach Woitt and the staff knew that we’d be in great shape, and it paid off. The 1976 season was obviously very special. It was amazing what we did week to week, and our accomplishments will always be close to my heart. I can’t wait to see a bunch of my guys at the reunion.”

As a young guy then who had recently returned to Pascagoula to start a career, I, too, have great memories of that 1976 team and season. One specific example: that North Natchez playoff game was at War Memorial in late November, in about 40 degree weather with an icy rain. I had a date with my future wife, and we sat with my father, the wonderful man who has started taking me to Pascagoula games when I was four years old. Good stuff.

So, all those connected to that team, get on out to the stadium early on Friday, October 15. I hope many townspeople will come out as well. The 1976 Pascagoula Panther football team did us all proud, and now they shall gather once again. 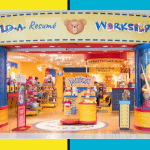 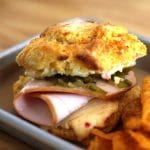