One 2019 Pascagoula High School graduate is headed off to not only further his education but also to serve his country. Jack Monroe Harrison, son of Drs. Donnis and Tonya Harrison, has received an appointment to the United States Military Academy, famously located in West Point, New York.

“Last summer, I began to really consider what kind of college I would like to attend,” said Jack Monroe. “I was looking for a college that would encourage discipline rather than an easy experience. After doing research and discussing the situation with Coach Sims and my parents, West Point seemed to be exactly what I was looking for.”

Speaking of Coach Lewis Sims, PHS head football coach, Jack Monroe was a three-year letterman and a two-year starter on the offensive line for the Pascagoula Panthers. He was named as the National Football Foundation and Hall of Fame Gulf Coast Chapter Scholar Athlete for 2018-2019 at Pascagoula High. He was also selected as the Mark Jones Award winner, which goes to the varsity football player who “excels the most in academic excellence, provides the most spiritual inspiration, and plays as a team player.”

Jack Monroe has done OK on the academic side at PHS as well. Check this out: graduated number one in a class of 252; was Mississippi Star Student recipient for 2019; made the Superintendent’s List (all A’s) for three years; was Key Club president his senior year; and received many additional honors and awards. Other than that, plus blocking huge defensive linemen, he hasn’t been very busy these past few years.

Blocking defensive linemen carries on a legacy from Jack Monroe’s father. Donnis was a solid offensive lineman for Pascagoula in 1987 and 1988 when the Panthers won the state championship his junior year, went 10-2 his senior year, and went on to play in the trenches at Millsaps. He and Tonya are understandably proud of Jack Monroe.

“We certainly cannot take full credit for Jack Monroe’s successes,” said Donnis. “There have been many people, teachers and mentors who have shaped him into an independent and structured young man, and he has always carried a positive attitude and a knowledge-seeking outlook. We are thankful for all the people who have influenced him in his life. We, along with family and a community of supporters, wish him well on his next chapter in life. We know that he has a challenging road ahead, but we are confident that he has what it takes to make it a successful journey.”

I don’t have to tell you how prestigious an appointment to one of our military academies is. These institutions only take “the best of the best”, and appointments are hard to come by. There’s a banner of Dr. Calvin Huey in downtown Pascagoula, partly for having attended the U.S. Naval Academy, and it’s up there for good reason. Now Jack Monroe can join Dr. Huey and other Pascagoulans who have gone on to matriculate at one of those bastions of American culture over the years. Young Mr. Harrison’s appointment to the United States Military Academy reflects well, not only on him, but also on Pascagoula High School and Pascagoula as a community.

“Pascagoula, Mississippi, is a wonderful place,” said Jack Monroe. “All the friends, coaches, teachers, and mentors I have met here have greatly improved my life, and I am proud to be a part of this community. Now, I am off to West Point, and I know that PHS has prepared me for what’s ahead.” 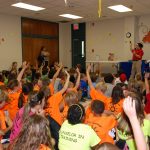 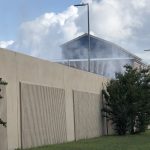