Construction has already begun and is set to be completed around Christmas 2019, according to Wayne Rodolfich, superintendent of the Pascagoula-Gautier School District.

The center will have a surround sound movie projection system, a rear projection system with the ability to digitally project a backdrop, space for a 160-piece band on the stage as well as proper floor capacity for dance performances. It will have more than 700 seats with wider seating than traditional performing arts centers, three classrooms, a catering kitchen, warm up rooms and a beautifully designed foyer area. The entire building will be able to be operated by an iPad.

All of these add up to many uses for the center including youth and children’s groups showing movies, orchestra and band performances, dance shows, church groups, banquets, large-scale meetings, and many more. Rodolfich said the goal is to make the space available to anyone in the community that wants to use it.

It was important to have the center on the school’s campus so that the students can walk to it from the school and that certain classes can have class in there during the day.

“We’re trying to build venues around our children,” Rodolfich said, adding that having the center on the school’s property will make it easier for them to secure the facility and maintain it.

The Performing Arts Center is part of the PGSD’s Strategic Plan. It has been discussed for years and now the school is moving forward. In fall 2017, the school district asked for a 4-mill tax hike to pay for the facility. This was put on hold in September but reinstated in March 2018.

“It’s a time where Pascagoula needs to put as many amenities in place as possible. It’s a great investment,” Rodolfich said. “That facility will be here for years to come for children and adults, and it will really be an asset to this community.” 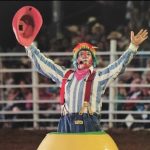