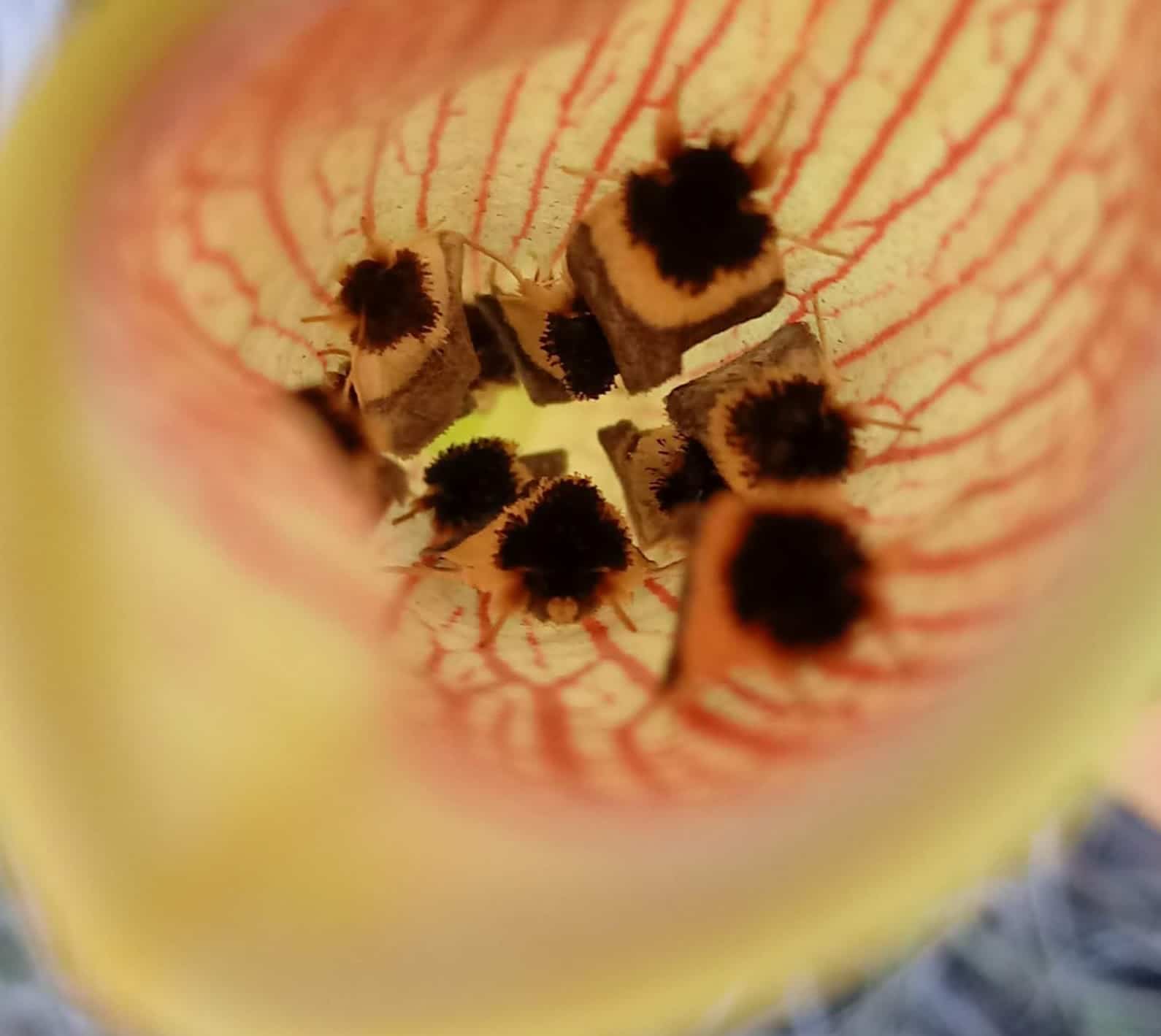 Not all insects are victims of pitcher plants, one of the most recognized types of carnivorous plants in our world. The design of the leaves (in the shape of hollow pitchers) of these plants is all about luring, then trapping insects that die and provide nutrients that are lacking in the plant’s environment. Opening up an old pitcher plant leaf will reveal the hard parts of ants, beetles and other insects that have found their way inside and died. For as many as a dozen species of insects and spiders, however, pitcher plants are home, providing a source of food and shelter.

The most commonly encountered of these pitcher plant insects is the Pitcher Plant Mining Moth, Exyra semicorocea. This curious yellow and black moth lives its entire life in and around all four of our local pitcher plant species and can be seen or detected throughout the year. Adults are most noticed during the spring when they emerge from overwintering pupae. The newly emerging leaves of spring can be packed with several adults, hanging out during the day, waiting for nightfall when they emerge to mate and seek new pitchers to lay their eggs.   The caterpillars are striking creatures and can be detected by looking for the telltale signs on the leaves that they feed upon and inhabit. These signs also speak to how adept these caterpillars are at feeding on the tissue of the plant all the while taking steps to reduce their exposure to predators. Firstly, these caterpillars feed on the inner tissue of the walls of the pitcher and do not eat all the way through. A common sign that these caterpillars are present is when you spot the toppled top of a pitcher: the tissue having been eaten all the way around the circumference of the leaf, causing the top to fold on itself. This effectively blocks anything from entering the pitcher, including predators.

Caterpillars may also lay out a silken web across the mouth of the pitcher that does much the same. Either way, predatory spiders or parasitic wasps are blocked from reaching the caterpillar. With these defenses in place, the caterpillar is free to eat its fill, leaving a pile of light-brown, ball-shaped droppings (known as frass) behind. Should the caterpillar deplete a given pitcher, it can move on to another until fully developed, where it transforms into pupae and later an adult.   Speaking of pitcher plants, our most common species is the Yellow-topped Pitcher Plant, Sarracenia alata, named for its yellow-topped leaves. And yes, the large, bright yellow flowers seen this time of year within our Wet Pine Savannas and along our wet roadsides, belong to this plant: a surprise to many local folks who know the flowers as “buttercups”. Other local species include the Parrot’s Beak Pitcher, White-topped Pitcher, and Purple Pitcher. Yellow-topped and Parrot’s Beak Pitcher Plants can be seen at the Mississippi Sandhill Crane National Wildlife Refuge, while all four species can be seen at the Grand Bay National Estuarine Research Reserve / Grand Bay National Wildlife Refuge.

Pitcher Plant Moths are but one of the interesting creatures to look for while exploring these great nature preserves that conserve one of the most biologically diverse habitats in all of North America, with pitcher plants being a few of the 350 plus species of plants found there.

So, while you are out and about enjoying the blooming of our pitcher plants, look for these pitcher plant eaters.   Photos courtesy of Lauren McLaurin. 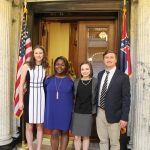 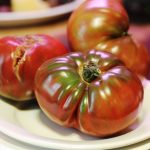