A quartet of standout prep basketball players from the “Southern Six” were recently honored as “Dandy Dozen” selections as chosen annually by the Jackson Clarion-Ledger.
A pair of Biloxi Indians were named to the prestigious list, in forward Duran Parish and guard James Turner. Moss Point big man Kedrick Osby joined that dynamic duo on the boys’ list as well.

The 6-foot-7 Osby is currently averaging 25 points and eight rebounds a game for the Tigers. Parish, who is also a wide receiver for the Indians football team, just signed a football scholarship with Vanderbilt on Wednesday. The 6-foot-3 swingman averaged 19 points per game and six rebounds per game last year, and this season he and Turner have helped the Indians of head coach Seber Windham jump out to a 12- record at the Christmas Break.
Turner, a 6-foot guard, is averaging 19 points per game to pace the Indians in scoring so far this season.

On the girls’ side of the ledger, Harrison Central’s Anaisha Carriere post player was named as a Dandy Dozen as well. The 6-foot-2 Carriere is just a junior.
Wrapping things up
Quite a few local teams were busy wrapping up play as the Christmas break approached earlier this week.
On Thursday in D’Iberville, Moss Point and Osby took on the home-standing Warriors and although the Dandy Dozen pick almost managed his per-game scoring average tallying a game-high 22 points, he got virtually no help from the rest of his Tiger teammates and D’Iberville came away with a 42-28 win. Sophomore guard Juan Santiago led the Warriors in the winning effort with 17 points.
In the girls’ game, DHS came away with a 30-19 win. The Lady Warriors were led by Kalea Storm with a game-high 11 points, including three 3-pointers, and Anayah Towner chipped in eight points to the winning cause.

Osby and the MPHS boys were coming off a big Region 8-4A opening win over visiting Greene County late last week 44-38 as Osby scored a game-high 26 points and Javaris Johnson scored six points.
Also, on Tuesday, Gulfport traveled to Petal for a pair of games, and the Admirals came away with a 54-39 win to improve to 14-2 on the season. Kamari Mitchell led GHS with 15 points, and Keanu Patrick finished with 10 points and Kylan Howze nine.
The Admirals are off until next week when they host their annual Christmas Classic Tournament from Wednesday-Friday.
Meanwhile, the GHS girls fell to a pair of Alabama teams earlier in the week dropping a 65-50 decision to Vestavia Hills on Monday and then on Tuesday falling to Hazel Green 61-38 on Tuesday.
The Harrison Central boys beat Germantown 48-40 on Tuesday, as Kaden Ragins poured in 21 pts for the Red Rebels and Sam Funchess chipped in 14 points for Germantown.
In the girls’ game, Germantown beat HCHS 65-51 behind center Madison Booker, considered the top recruit in the state, as she tallied 23 points in a battle with Dandy Dozen pick Anaisha Carriere of Harrison Central who poured in a game-high 26 points in the losing effort.
Also on Tuesday, Pascagoula hosted Pass Christian in a pair of varsity games. The Panthers came away with a 66-39 win over the Pirates, as Robert Millender led the way with 17 points and 12 rebounds in registering a double-double, and Dorian McMillian chipped in 13 points and a trio of steals to the winning effort while Kelan Rich added 12 points and three steals, as well as a trio of assists and Chris North collected 10 points and four boards. Sophomore Brendan Necaise paced the Pirates with 12 points, all coming on four 3-pointers.
In the girls’ game, the Lady Panthers nipped PCHS 47- 37 in a closely contested affair. Amiyah Hedrick tallied a team-high 20 points for Pascagoula and Bethany Graves chipped in 16 points to the winning effort, while Kamaiyah Pruitt poured in a game-high 26 points for PCHS.
The Stone girls beat the George County Lady Rebels 36-20 on Tuesday as well. 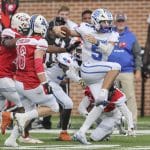 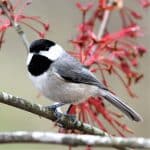