There will be a big one-day event Saturday at Pascagoula as the Raising Canes Panther Classic takes place.

The Pascagoula girls will tip the tourney off against Lawrence County at 11 am., before five straight boys’ games wrap up the day.

At 12:30, Pass Christian takes on Quitman and then D’Iberville faces Oak Grove at 2 p.m. Blount (Mobile, Ala.) meets Meridian at 3:30 and then Hattiesburg faces Williamson (Mobile, Ala.) at 5 p.m.

The host team Pascagoula Panthers then face off with Gulfport to end the festivities at 6:30. It will mark the third time this season the Admirals and Panthers have played, and Gulfport has won the two previous contests including just last week in the 39th annual Admiral Hardwood Club Holiday Classic.

In addition to the quartet of local boys’ teams playing in Pascagoula Saturday, another pair from the “Southern Six” will head north to Pontotoc to compete in the “Tangle on the Trail” at Pontotoc High School.

Following that game, fifth-ranked Biloxi faces 12th-ranked Starkville in a match-up of a pair of perennial state powers. The Indians are guided, among others, by the Dandy Dozen duo of guard James Turner and forward Duran Parish, while the Yellowjackets counter with a Dandy Dozen pick of their own in 6-foot-7 standout Makhi Miles.

Dandy Dozen pick Jay Tyler and his Olive Branch Conquistadors are also playing in the Tangle on the Trail.

Meanwhile, back on the girls’ side of things, a pair of the top teams in the “Southern Six” head to Meridian to compete in the Girls Rock Classic on Saturday as well.

The unbeaten and 18-0 Hancock Lady Hawks face off with West Jones at 3 p.m., followed by Biloxi taking on Hutchison High out of Memphis at 4:30.

Also on Saturday, The Harrison Central girls and the Gulfport girls each travel to Jackson to play in a tourney at Belhaven College as HCHS takes on Clinton at 3 p.m., followed by the GHS girls facing Brandon at 4:30.

“The Starting 5 in the Southern 6”

Debuting this week is our “Starting 5 in the Southern 6” which each week throughout the rest of the prep basketball season will highlight five individual performances from the following week as well as five upcoming games that week in our area to keep an eye on. 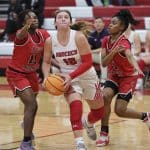 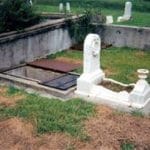