Fortunately, the rain held off for the 2021 Ocean Springs Marine Mart Fishing Tournament, allowing for a great turnout.

“You don’t have a great time when you are a tournament fisherman. You’ve got maybe five minutes of really good fun, and four hours of boredom waiting for another bite.” Larry Marreel, tournament participant, said. He brought in a winning 25.4 lb. redfish and was one of over a dozen cash-prize winners.

Fishermen on the coast look forward to the annual fishing tournaments. Ocean Springs Marine Mart, located on Front Beach in Ocean Springs had their annual event on June 4th and 5th. This year, the weatherman predicted rain most of the day, but luckily for all involved, the heavy rain was delayed.

The event held at the Ocean Springs Harbor offered live bands, food, and cold beer. The Tall Boys, a local original Hillbilly Rock band, played on Saturday to the crowd watching as the fish were weighed and measured for the judges. There might not have been as many fish being brought in as in past tournaments, but it was still a successful day.

There was up to $12,000 in prize money up for grabs across all the categories. Go to Ocean Springs Marine Mart’s Facebook to find all the winners, and watch some of the fun from the tournament below. 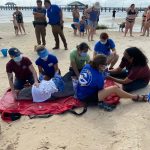 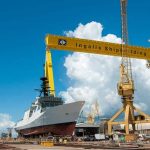