According to the North American Bluebird Society, a non-profit that oversees bluebird conservation and education, the Eastern Bluebird nesting season begins on March 1st. Try telling that to our local Jackson County bluebirds, however, that started constructing their nests in early February.

By March 1st, many nest boxes not only were full of the pine needle and grass nests that are typical of Eastern Bluebirds, but the first clutch of 4-6 turquoise blue eggs were already laid.

Bluebird eggs, like many songbirds, hatch after about two weeks of incubation. Bluebird parents both take an active role in raising the young ones, feeding them large quantities of insects, spiders, and other small invertebrates. The young birds rapidly grow from featherless and helpless to noisy feathered “teenagers” begging for food. Within three weeks of hatching, these babies will be fully fledged and ready to fend for themselves.

Once the fledglings leave the nest- some willingly and some encouraged by the parent birds- the adult male helps to feed them while the adult female starts the process of laying a new clutch of eggs. In our warm coastal climate, songbirds like bluebirds can raise four or more clutches in a season.

Encouraging nesting birds in your yard is as simple as putting up a nest box appropriate to the species you hope to see and protecting it from predators. Bluebird boxes may also attract Carolina Chickadees, Tufted Titmice, House and Carolina Wrens, and more. Patterns to make a nest box can be found online for a variety of species. It is important to protect your nest boxes from predators- everything from raccoons to snakes to neighborhood cats like to eat bird eggs and young.

It’s also critically important that we don’t disturb, touch, or collect nesting birds. Songbirds, as well as all of their nests, eggs, and feathers; are protected by the Migratory Bird Treaty Act.

If you observe a baby bird that has fallen from its nest, continue to monitor it without touching it. In many cases, it is learning to fly and simply misjudged the landing. The parents are typically watching it and feeding it regularly. If the fledgling is in danger from predators, traffic, or something else, you may scoop it up and put it on a nearby branch out of the way, but where the parents can still observe the baby and feed it.

Help our songbird populations have a successful nesting season by putting up nest boxes, keeping them clean and free of predators, and observing the babies from a safe distance. 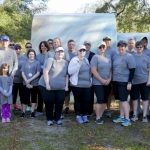 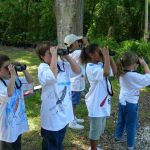