On the first Friday in June, Americans celebrate all the gooey goodness of donuts. But many don’t know that National Donut Day actually has its roots in doing good. This sweet tradition dates back to World War I, when nearly 250 Salvation Army volunteers known as “Donut Lassies” traveled overseas to provide emotional and spiritual support as well as fried confections, supplies, and other services to troops on the front lines.

The Donut Lassies fried donuts in small pans and are credited with popularizing the donut in the United States when troops returned home from war. The Salvation Army in Chicago celebrated the first National Donut Day in 1938 to help those in need during the Great Depression and to commemorate the work of the Donut Lassies.

For more than a century, the organization has continued to provide a wide range of essential services like food, shelter, and emotional and spiritual support to the most vulnerable and to many of the men and women serving on the front lines of need.

To honor the history of Donut Day, The Salvation Army of the Mississippi Gulf Coast will celebrate by bringing around donuts to our local responders. We thank them for their help every year with our red kettle campaign. 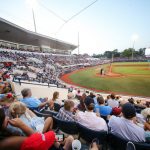