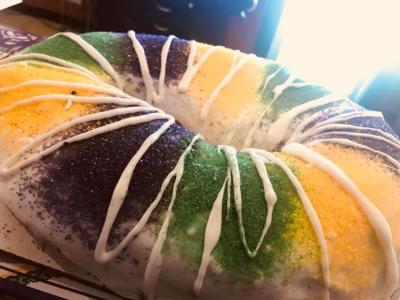 It’s Mardi Gras season, which means beautiful and delicious king cakes! As you may know, king cakes are those rings of sweet pastry with icing on top and are dusted with yellow, purple, and green sprinkles. The green sprinkles represent faith, the purple stands for power, while the yellow stands for justice.

In addition to the sprinkles as a decoration, there is a plastic baby in the king cake, which according to some, may symbolize baby Jesus or represent luck or prosperity. Thus, whoever finds the baby is declared king or queen for the day and is also supposed to host next year’s celebration. There is another interesting theory about how the baby in the king cake came to be, which comes from a story about how a New Orleans bakery bought a shipment of small, plastic dolls from Hong Kong in the 1950s. In order to use them up, the plastic dolls took the place of the usual small bean or king that were typically placed in the king cakes.

It is thought that the king cakes came from France (and were started there during the 12th century) and were brought to New Orleans in 1870. There is a religious significance attached to king cakes, as king cake season starts on January 6th, which is a holy day known as the Epiphany. The Epiphany, according to Roman Catholic tradition, is when Jesus made himself known to the three wise men. It is theorized that the king cakes were made to honor the three kings and that they were made circular to symbolize the circular route taken by kings to attempt to get to the Christ child (and to also confuse King Herod who was trying to get to the Jesus). Other sources suggest that the circle is meant to mimic a crown.

Although the king cakes were brought over from France, the king cakes in New Orleans are more similar to the Spanish or Latin versions of the king cake. The French version is baked with an almond-filled puff pastry, which gives it a fluffy texture.

So where do you get these cakes? Here’s a list of the best king cakes on the Mississippi Gulf Coast. 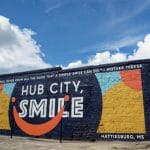 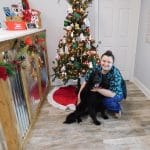