“Lady in Red” is a popular song from 1986 by Chris de Burgh, and that’s typically what comes to mind when people first hear this title. However, Mississippi has its own Lady In Red, and she still remains a great mystery, even today.

In 1969, a backhoe on Egypt Plantation, near Cruger, Mississippi, hit a coffin just three feet underground. Workmen accidentally came across the coffin while digging for a septic system. They were shocked to discover an expensive, glass-sealed cast-iron casket with a window. Inside, a perfectly preserved young woman with long auburn hair and youthful skin, dressed in a red velvet dress with a lace collar and wearing white gloves and silk/leather square-toed boots. Experts estimated her birth date. The date of death on her tombstone is the date of her being unearthed on Egypt Plantation (1835-1969).

The following account of the remarkable preservation of the body is from the (Jackson, MS) Clarion-Ledger, August 29, 1969:

“The unidentified woman was discovered a few days ago in a metal, glass-lined casket in a garden plot on Egypt Plantation and near the home occupied by the J. T. Thomas family. It was discovered by a crew of workmen operating a backhoe while digging a septic tank line.

“Persons viewing the woman, who has been described as in her twenties or thirties, dressed in red velvet, with long brown hair, estimate she has been dead at least 75 years.”

“The method of preservation used for the Lady In Red was common prior to the Civil War, when custom-made caskets, shaped to the body, were ordered as one would order a dress. The glass that sealed the coffin was placed over the body, and alcohol was poured inside until it was level full, and then sealed with a castiron tip. When the backhoe machine hit the coffin, alcohol spilled from the casket, and spots of the liquid were seen on the folds of the woman’s dress.”

Folk or forgotten lore? There are several accounts from individuals claiming to know the back story of The Lady in Red. At the time, it was thought that Egypt Plantation was a stop for riverboats coming up the Yazoo River to Greenwood. There was some speculation that the Lady in Red could have been a passenger on a paddlewheel riverboat when she died.

Another account from local residents in Tchula speaks of how they were taught that the young girl was hurriedly buried when it was thought she had a fever of some unknown origin, likely, yellow fever. For fear of being contagious, she was buried at the first riverport available for the riverboat. There are two versions of this particular story, one being she died on the boat and the other that the body/casket was being taken somewhere.

Either way, both versions end with the burial, resulting in a plan to get her off the boat as quickly as possible to prevent anyone from possibly catching the fever she supposedly died from.

Lastly, another local account speaks about how there was a flood of high water the year she died around 1900, and no place dry to bury her, so they put her in a boat and went out to find a spot of dry land. The location in Egypt was 7 miles down from where she lived. They would have drifted that way in a boat. The story goes that they found a dry spot and buried her there.

The Lady In Red burial ground was moved to the Oddfellows Cemetary in Lexington, MS, and has become a tourist attraction for tourists and locals alike in the Delta. It is indeed a mystery that remains to be solved, and for the naturally curious, it’s hard not to wonder…who was the Lady in Red? 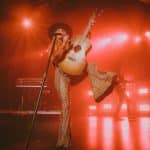 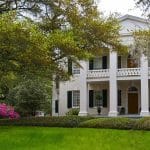