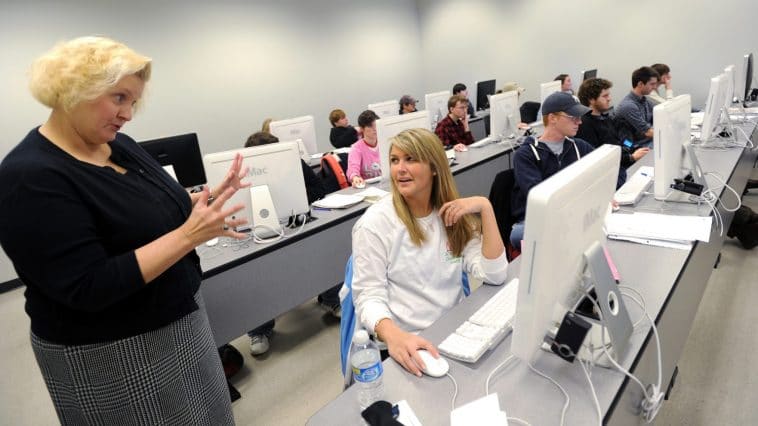 Journalism professor Nancy Dupont works with broadcast students in 2010 in a classroom at the School of Journalism and New Media. Dupont, who retired in 2021, died Dec. 25. Photo by Nathan Latil/Ole Miss Digital Imaging Services

Colleagues and former students are mourning the death of Nancy McKenzie Dupont, who died Dec. 25, just a few months after her retirement from the University of Mississippi School of Journalism and New Media.

In her 15 years at the university, the professor emerita touched the lives of countless students and contemporaries, both sprouting and enriching many careers.

Debora Wenger, journalism professor and interim dean, remembers Dupont from long before their time in the journalism school. The two met in Charlotte, North Carolina, producing different time slots for the WSOC-TV news operation. In their time working together, Dupont gave Wenger a treasure trove of knowledge, as well as many stories “not PG enough to share.”

“She was a hoot,” Wenger said. “That’s the best way I can describe it. There was always laughter around when Nancy was in the room.

“She brought so much passion to the job and cared so much about putting on the best newscast we could every night.”

Wenger and Dupont became close friends, and when Wenger’s husband, Mitch, was recruited to teach at UM years later, Dupont and her husband helped the family along at every step of the way.

“From the minute we came to his interview, to looking at a house, to getting involved in the community, they were always there to make us feel welcome,” Wenger said. “It was great to have Nancy as a colleague.”

Dupont joined the UM faculty in 2006 after several years as an educator at Loyola University-New Orleans. Before that, she had had a long career of reporting and producing in Tennessee, Florida, the Carolinas, Arizona and her beloved New Orleans. At UM, she taught classes in broadcast journalism while acting as faculty adviser for “NewsWatch Ole Miss,” the student-run television news station.

As part of her duties, she oversaw the student production of “NewsWatch” each day and became an instrumental part of its development.

“Obviously, journalism has evolved in the past couple of decades,” Wenger said. “Nancy made sure that she had her pulse on what was changing, but at the same time always kept the foundational principles journalism was built on front and center.”

Wenger recounted the busiest days at the Student Media Center with an image of Dupont as a “commander marshalling the troops.”

“She would be shouting out orders, sitting at a computer looking up information and interacting with the students and staff – all effortlessly,” Wenger said. “That’s what she loved to do. She had her band of troops who would just jump to it.”

Sports reporter Sudu Upadhyay, a former member of “NewsWatch,” first met Dupont, but he didn’t really get to know her until he began working with the broadcast as an Ole Miss freshman. Apparently impressed with his work, Dupont nominated Upadhyay to accompany an Ole Miss Engineers Without Borders team to Africa to help document their work there.

“That trip to Africa is when we became friends,” he said. “Coming back and editing that documentary with her was a turning point in my education for sure.”

Later in his education, Upadhyay switched his academic adviser to Dupont.

Dupont traveled to Africa for two Engineers Without Borders trips, in 2012 and 2014, to the Hedome village in Togo. She led a team of student journalists who produced a documentary as the engineers helped build a school and other improvements for the village.

The conditions were difficult, but Dupont handled the challenges with grace, said Marni Kendricks, senior assistant dean in the School of Engineering and former faculty adviser for the EWB chapter. Team members often spent nights talking and building personal connections, she said.

“Lifelong bonds formed on those journeys from the Ole Miss campus to rural parts of Togo made us like family, and heartfelt connection with Togolese friends made the experience even more real and unforgettable, something I’ll always cherish,” Kendricks said.

Along with her teaching, Dupont contributed greatly to the furthering of the discipline of journalism in other ways. For many years, she organized the annual Mississippi Association of Broadcasters Day at the university and was twice named chair of the Broadcast Education Association’s news division.

In February 2021, the Mississippi Scholastic Press Association honored Dupont by renaming its Broadcaster of the Year award after her.

While many saw Dupont as a living incarnation of broadcast journalism, she also shared another passion with some of her students: hockey. She served as faculty adviser for the Ole Miss Ice Hockey Club.

Along with helping the club out when it came to video projects and promotional videos, she made sure to attend the club’s games and support the players.

“She did everything in her power to help us,” said Ole Miss alumnus Braden Storner, who was captain in 2019-20, when the team won its first South Eastern Collegiate Hockey Conference Championship. “She was there from the beginning and if it wasn’t for her, I don’t know where we would be today.”

Besides teaching, co-authoring the book “Journalism of the Fallen Confederacy” in 2014, as well as 12 book chapters. She frequently presented her research at the Symposium of 19th Century Journalism, the Civil War, and Free Expression and at the Transnational Journalism History conference.

Dupont, who earned her doctorate in journalism from the University of Southern Mississippi in 1997, also published extensively about 19th-century Mississippi and Louisiana newspapers.

Dupont’s influence will be felt across campus for some time. Whether it’s caring peers or wiser students, one can easily see the fruits borne by her time at the university.

Journalists in newsrooms around the country owe their early development to her, and many have released statements regarding her passing.

“There is no question I would not be where I am without you,” WBMA-TV news reporter Stephen Quinn, of Birmingham, Alabama, said in a Facebook post.

“She was a force to be reckoned with and she will be missed beyond words,” alumna Abbie Geveshausen, a communications specialist for the Cypress-Fairbanks Independent School District, said in a post on her Twitter account.

“When communicating with her students, I was struck over and over by how many credit her with putting them on the path to successful careers they love,” Wenger said, reflecting on past and ongoing statements from alumni. “Many look back at something that happened in her class and realize how it taught them to navigate a tricky situation or tell a story in a way that no one else can.”

Dupont is survived by her husband, JC Dupont, of Oxford. Arrangements for a memorial to pay tribute to her are pending.

For many graduates and faculty members, Dupont remains a powerful force and wonderful friend, never to be forgotten.

“You don’t have many friends who you can say you’ve worked with, someone who can help lighten the load,” Wenger said. “I was lucky enough to have that with Nancy twice.” 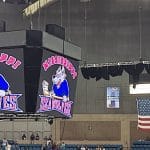 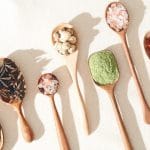