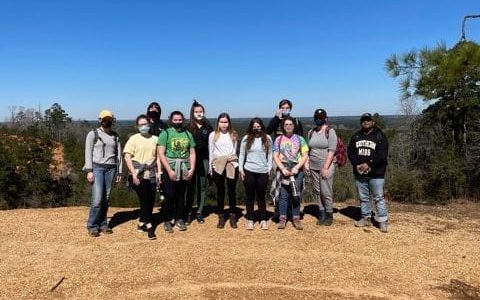 USM’s Marine Conservation Club (MCC), which specializes in the education and environmental aspects of marine life, recently held a cleanup day at Mississippi landmark Red Bluff in Marion County. Though a beautiful hiking spot, there has been an unfortunate litter buildup due to the numerous people visiting this natural attraction.

Beginning on USM’s campus at 10 am on February 20th, the MCC traveled nearly an hour to the cliff of Red Bluff and began cleaning. Of course, the students took separate cars where possible and wore masks for the duration of the cleanup in order to be COVID-safe. Cleaning for a total of about four hours, the MCC collected eight industrial-sized bags worth of garbage!

I got the chance to speak to both MCC President Megan Hansen and Vice President Sarah Toepfer, who led a group of 10 people, alongside another club leader named Taylor Guild.

“Although it was warmer than expected, it was an enjoyable time and efficient work,” Hansen said while specifying that a large amount of trash was found near the parking areas since it is likely for litter near the slope to get flushed out to the Pearl River.

Toepfer shared many details about the objects found during the cleanup and the experience as a whole, explaining that Red Bluff, itself, is a privately owned property, so that means no city workers regularly clean up trash there.

In addition, Red Bluff does not have accessible trash cans on or around the trail, meaning that trash piles up as an unfortunate side effect. Toepfer also told me that the majority of the litter found was food trash, likely coming from people on the trails.

“We found a full garbage bag of trash like someone was having a party there,” Toepfer said. “They had full cans of Vienna sausages, glow sticks, beer cans, diapers, menstrual products, and a pack of tuna.”

Wildly enough, this was only the beginning of their findings as Toepfer also mentioned that they found a TV cable, a large empty bottle of vodka, and “a bunch of blue glitter like someone was having a gender reveal party on the side of a cliff.”

As comedic as it may sound, it is also a huge issue that such a wide variety of trash can build up in one of Mississippi’s beautiful natural places.

With environmentalism in mind, we should applaud the Marine Conservation Club for all of its hard work. We also need to be more aware of our own trash production and ensure that we do our part as citizens to keep nature clean. Though MCC does great work, we can learn a thing or two as citizens to make Mississippi a more beautiful place overall.

MCC plans to have more cleanup days like this one in the future—March 20th and April 3rd of this semester! 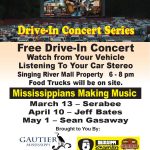 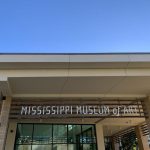