December 10, 2022: Mississippi All-Stars Dante Dowdell (Picayune) (3) during pre game introductions during the 2022 Mississippi-Alabama High School All-Star game at Hancock-Whitney Stadium, Mobile, Alabama. Photo: Bobby McDuffie/228 Sports
MOBILE, ALA. — A new chapter unfolded in the annual Alabama/Mississippi All-Star Prep Football Classic Saturday afternoon.
But unfortunately for Mississippi, the result was the same as it has been many times before.
The 36th edition of the prestigious affair was the first ever to take place at Hancock/Whitney Stadium on the campus of the University of South Alabama in Mobile. Alabama rallied late with a pair of fourth-quarter touchdowns to overcome a 10-0 deficit and pull out a 14-10 win over the Mississippi squad.
The result was an all too familiar one for Mississippi, as Alabama has a commanding lead in the all-time series at 25-11 overall.
Alabama quarterback Christopher Vizzina hit Davion Dantzler on a 16-yard scoring strike with 2:35 to play for the winning points.
The first half was a defensive struggle, with the only points coming on a 35-yard field goal by Bart Edmiston of Ocean Springs with 1:31 left in the first quarter.
Southaven’s John Slaughter had an interception for the Mississippi team in the first half and Vicksburg’s Jaleel Fleming came up with both a fumble recovery and an interception. Both Moss Point’s Jamarious Brown and Picayune’s Zavion Coleman had tackles behind the line of scrimmage as well, while Suntarine Perkins had five tackles for loss in first half as Mississippi held Alabama to 20 yards of total offense in the first half.
Also, Pascagoula offensive lineman Jeremy Flora recovered a fumble by quarterback Bray Hubbard of Ocean Springs to help Mississippi retain possession at mid-field late in the first half.
Edmiston also averaged 49 yards per punt in the first half on a pair of kicks.
On Mississippi’s opening possession of the second half, South Panola’s D’Mariun Perteet raced 52-yards on a touchdown run to extend the lead to 10-0, as Edmiston tacked on the extra point.

Alabama finally got on the scoreboard with 8:42 left in the game on a 4-yard touchdown run by quarterback Earl Woods of Hueytown, which cut the deficit to 10-7. Vizzina’s scoring strike to Dantzler six minutes later completed the comeback.
Perkins was named Mississippi’s Most Valuable Player in the game, while defensive end Peter Woods of Thompson High was named the MVP for Alabama.
Eight players from the “Southern Six” were part of the Mississippi team, including Hubbard who started at quarterback and tailback Dante Dowdell of Picayune who joined him in the starting backfield. In addition to Edmiston, who handled both punting and place-kicking duties for Mississippi, five linemen were part of the squad including Flora, Brown, Coleman, Amarion Ware of Harrison Central and Ladarius Jordan of Gulfport.
In fact, Hubbard and Brown were chosen as team captains and represented the team at the pre-game coin toss on the field.
Alabama was led by Auburn High head coach Keith Ethridge on Saturday, while Chis Cutcliffe of Oxford was the Mississippi head coach.

The Alabama/Mississippi All-Star Classic began in 1988 at Ladd-Peebles Stadium in Mobile, and was contested at that venue until 2011 when it moved to The Cramton Bowl in Montgomery where it remained solely for four years. From 2015-2021, the game as played on a rotating basis between Hattiesburg at M.M. Roberts and The Cramton Bowl in Montgomery.
It was announced recently that the game will rotate between Hancock/Whitney Stadium and M.M. Roberts Stadium for the next five seasons. It returns to Hattiesburg next year and will be back in Mobile in 2024. 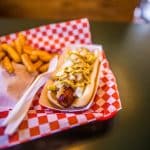