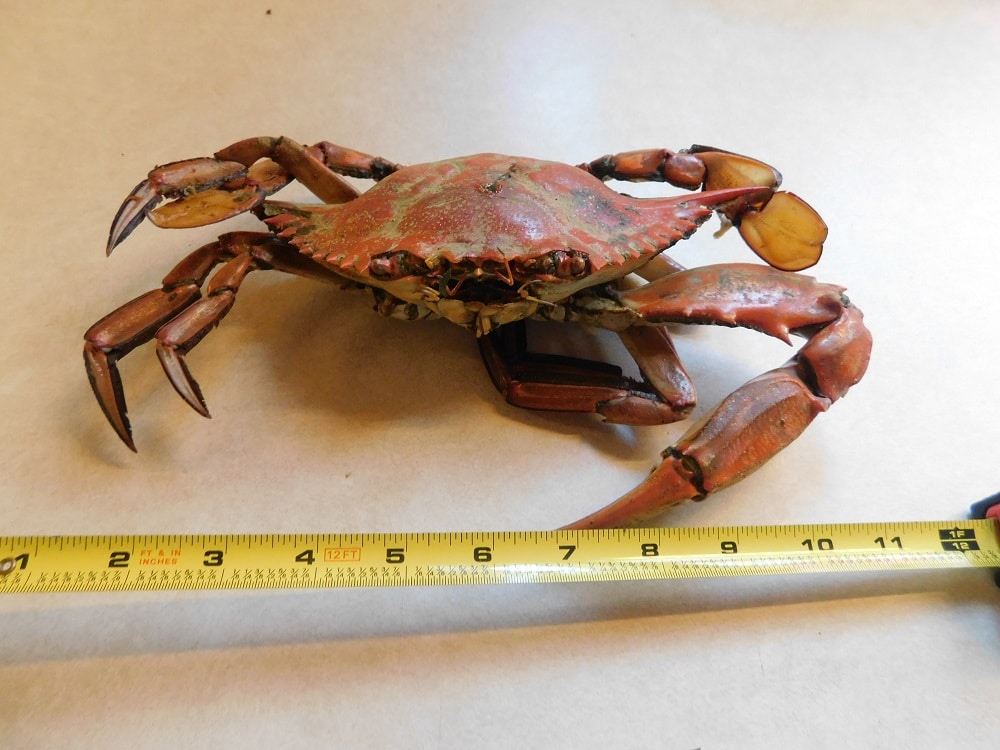 This was my latest catch, a whopping 12″ across, but it was not always that way.

As the story goes, my mother used to take my highchair to the dock at the west end of Beach Boulevard in Pascagoula.  There I would sit while she went crabbing. My earliest remembrance of crabbing is when my father used to take me to the power lines just south of Highway 90 on the east bank of the East Pascagoula River.  There was a large concrete square there that was supporting the power tower, carrying the power lines across the river.  The base was a 3 foot wide concrete square of about 30 feet. The center was open, and it extended into the river, it was perfect for crabbing.

Living a couple of blocks from there was a complete advantage.  As I became older, I could go by myself, riding my bike with whatever I needed and coming home with those delicious crabs in a bucket.  Less complicated times for sure, I could be gone all day and there was no reason to worry.

I remember one particular time when my ‘Yankee’ cousins came to visit from Pennsylvania, and I took them crabbing.  Never having done that before they were somewhat terrified by the snappy creatures.  Trust me if you do not handle them just right they will give you a painful snap with those strong claws.

I have used several methods to crab in my lifetime.  Early on I used to cycle to Wayne Lees to get some chicken gizzards (absolutely my go-to bait), I used only a string with the bait tied on the end and maybe a weight to get the bait down to the bottom where crabs feed. This method takes a lot of patience and dexterity.  It is best to do this as teamwork, as someone has to coax the crab to shore, while another person mans the net to snag the catch.  The trick is to gently pull the bait along, coaxing the crab to within range of the net.  All of this time not allowing the crab to see you, because if they do they will let go and you have to start all over again.

Another method was the net, a round trap with a large open metal circle at the top and a smaller one at the bottom.  This framework is covered with a string net that the crab cannot get through.  The bait is tied in the bottom and when lowered the trap sets flat on the bottom.  They need to be checked periodically for crabs by pulling them up by a string attached to the top hoop. Again because the top is completely open, you have to use stealth to make sure the crab does not suspect you and swims quickly out of the trap.  This method works great from a boat while others are fishing.  Believe it or not, I once fished on the Pascagoula River and was actually catching crabs on my fishing pole!

Later on, in life, I bought my first official crab trap.  Having moved to a bayou off the Pascagoula River I had an immediate place to use a trap.  A metal wire contraption, with a place for the bait, about 1 foot tall and 2 feet square, this fancy contraption has an opening for the crabs to get in and a complicated wire system to keep them from getting out.   The crab is lured to the bait and due to the construction is not supposed to find the way out. Beware, however, I have found many times, no bait, and no crab.  I also found out around this time that they love anything barbequed, leftover pork chops, ribs, steak fat have proved to be good catchers.  As an added bonus I have also caught catfish, brim, and bass in the trap, go figure?

Once you have your catch, it is time to clean or cook.  Most people recommend boiling or steaming the crabs whole.  However, in my early years, I guess it was a family tradition, or no one wanted to make a mess in the house, we used to clean them first.  I remember clearly using a long kitchen knife and a pair of plyers.  I would stab the crab in the back with the knife and pull the claws off with the plyers then proceed with removing the flap on the bottom of the crab along with the shell.  Remember the ‘Yankee’ cousins? They were so grossed out.  Then using the garden hose I would clean out the dead man’s fingers and the guts.  These days I guess I just got tired of playing with live crabs and boil them whole.

I hope you enjoyed my remembrance and may it spark some pleasant memories of your own or inspire you to go crabbing and make memories for the future. 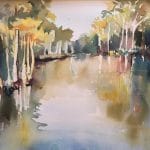 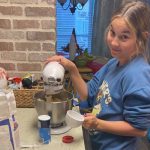