Sports Shack started as a way to bring merchandise reflecting the University of Southern Mississippi to the Gulf Coast. Since then, it’s expanded into collegiate paraphernalia of all kinds as well as a place to buy items for local teams including the Ocean Springs Greyhounds.

Sports Shak opened in 2007 in D’Iberville but moved to Bienville Boulevard in Ocean Springs in 2017. In 2007, owner Pam Thompson had recently sold a business and wanted to start a business selling USM merchandise. Along with her husband and co-owner, David Thompson, they decided to add schools from the Southeastern Conference as well as the Saints.

According to David, it was a perfect fit because “We are both avid sports fans!”

They are a retail store, carrying apparel and accessories, for many colleges including Ole Miss, Mississippi State, USM, Alabama, Auburn, and LSU. They also carry merchandise for the New Orleans Saints and have added more baseball stuff with items from Conference USA at MGM Park. Also, this past year, Sports Shack was named the official “Greyhound Store” of the Ocean Springs School District.

Their business has grown steadily in the past 11 years, and they see an uptick when certain teams are winning or play in a championship game, according to David.

Clothing is their number one selling item, but they offer quite a variety of other things as well including home items such as décor, pottery flags; automobile items such as decals, license plates, flags, hitch covers; and accessories like hats and jewelry. They also have a few autographed items available in the store.

Pam is from Moss Point and David is from Pascagoula, but the pair live in Ocean Springs now. Between the two of them, they have five children and seven grandchildren. They chose Ocean Springs for their business because it’s “close to home, and we wanted to bring the store to our local community,” according to David.

“We are blessed to be in a community that believes in shopping local,” David said. “We also believe in giving back to our community and to our customers.”

For customers, they have an “awesome loyalty program,” and for the community side, David said they support “almost every charity in the community in one way or another” with either donations, silent auction items or door prizes. They are also members of the Ocean Springs Chamber of Commerce, helping with their events as well as Rotary events.

To close, David said: “Please shop with us and shop locally. We can only support the community if the community continues to support us! We love our customers and we want Sports Shack to be your favorite store.”

For more information on Sports Shack, you can find them on Facebook. 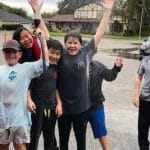