I am going to add on to last weeks story, if you don’t mind. Just like most people, I am working in the yard, cleaning parts of my little cottage that haven’t been investigated in a long while, and fortunately, working on a few assignments and a book on Southern food ways. But more than anything else I am cooking and baking. And I share everything I cook on my Facebook page. Everything, good and bad.

No, I have never been much of a baker, although chef friends have urged me to round out my skills and at least try the basics. But, in truth, I was intimidated by the very thought. I am the kind of home cook that likes to throw things together, a little of this and a little of that. Baking just won’t work that way. It’s a precise science, everything has to be measured, and you just cant’ throw in what looks like enough baking powder, or Lord forbid, yeast! Disaster awaits the baker that is haphazard, unless you have a lot of experience under your belt. Obviously, I do not.

I did bake biscuits a few years back, but they weren’t that good. It was not an encouraging experience. I may have made pancakes a few times, and, way back in the 1970s I think I remember having a go at Julia Child’s French bread recipe. It did not go well. But with as much time on my hands as I have today, I decided to take the first steps. I found a basic bread recipe on line, (https://www.tasteofhome.com/recipes/basic-homemade-bread), and it worked out quite well, at least the second time, and, perhaps more importantly, it made my house smell good, and I had fun too.

I have made bread several more times, and just today, I made pizza dough. No, it wasn’t the best pizza I ever had, but I think next time I make it, I will do a better job. I topped it with my homemade bolognese sauce, mushrooms, ham I had cubed and browned first, mozzarella and provolone cheese. It was pretty good, if I do say so myself.

I also tackled a German/French dish called flammkuchen. I think it comes from one of the most wonderful parts of France, Alsace Loraine. It gave me some trouble, but it was because they had left sugar out of the ingredient list, and the yeast just wouldn’t bubble without it. Flammkuchen is like a tart, made with thinly rolled out bread dough, onions that have been cooked in butter till translucent, bacon and heavy cream. I did not get the dough rolled out thin enough, and next time I will cook the onions a bit longer and use a better bacon. I will also have to try and find crème fraîche, sometimes Rouses has it. But let me let you in on a little secret, you are never going to find good crème fraîche anyplace but France.

So, I hope I have inspired you to get in the kitchen and try something new and different. I promise you, if you are anything like me, you will feel better when you have something that you made from scratch, to share with friends and family. 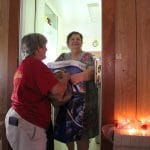 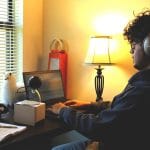