There is a special connection between the Moon and Mississippi, a relationship that is enhanced when the Moon is full. August’s Full Moon will appear on the evening of Thursday, August 11th, and will be at its peak illumination about 9:36pm. Look upwards towards the southeast after sunset and catch the Sturgeon Moon rising.

Most think of August as a time for enjoying the summer sun, but it’s also a celebration of the moon. Some say the moon represents gratitude for what you have, honors where you’ve been, and others believe it offers balance to the world that exists around us.

The August Full Moon will also be the final super moon of the year, which is when a full moon’s orbit is the closest to Earth. This makes the moon appear especially big and bright. There are eight distinct cycles of the moon, four prime phases with the full moon being its most spectacular stage.

Why Is August’s Full Moon called the Sturgeon Moon?

There are claims it is named after the sturgeon fish, according to the publication The Old Farmer’s Almanac. Long ago, the legend tells of an abundance of sturgeon fish being caught in the northern Great Lakes and in Lake Champlain under the full moon. There may be less fish today, still, the legend lives on through the naming of the summer moon.

The Moon has inspired movies, such as Cher’s hit film Moonstruck, in which the moon is the force that drives people to be wild and free. In the movie Cher falls in love with a much younger Nicolas Cage. The moon influences her feelings, and she falls in love with him, because she “can’t help herself.”

The Moon has played a part in many memorable songs. One of the most famous about our Mississippi moon is recorded by The Doobie Brothers, titled Black Water. The song about the Mississippi River has a famous and captivating line, “Mississippi moon, won’t you keep shinin’ on me.” The song was not expected to be a hit, but it surely is well remembered today.

There are several songs titled Mississippi Moon, Jerry Garcia, Grateful Dead and The Jerry Garcia Band, recorded various versions of the 1971 Peter Rowan song, and in 1995 John Anderson sang an original country song written by Tony Joe White and Carson Whitsett. These songs capture the beauty, nostalgia and mystery of the Mississippi Moon.

Look up into the night sky on August 11th to view the Mississippi Sturgeon Moon. You may even  hear in your head, “Old black water, keep on rolling, Mississippi Moon won’t you keep on shinin’ on me.” 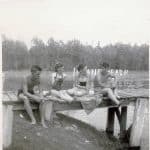 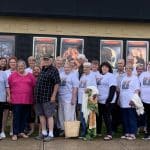