Residents and visitors will have the opportunity to catch two colorful Fourth of July fireworks displays in Jackson County this year.

Ocean Springs will get the party started early with a fireworks display on July 3.

Fireworks will be launched from a barge in the water near Fort Maurepas beginning at about 8:45 p.m. on July 3. Music will be provided from 7 to 10 p.m. Certain streets will be closed to thru traffic from 5 to 10 p.m. on Wednesday, and police officers are scheduled to lift barricades at 10 p.m. to allow vendors to exit the festival area.

Parking on private property will not be allowed, an official said, and no glass bottles are allowed on the beach. Additionally, there will be no parking allowed on the north side of the beach after 5 p.m.

The fun will continue on July 4 in Pascagoula.

The City of Pascagoula and Main Street Pascagoula will host a beachfront fireworks display starting at 8:40 p.m. Fireworks will be visible along Beach Boulevard or from a boat offshore. Spectators can also watch the show from Beach Park or the new Amphitheater at The Point.

Download the IHEART RADIO application on your phone and select MAGIC 93.7 to listen to patriotic music in concert with the fireworks. The Beach Park Pier will be closed that evening, prior to the fireworks, and there will be a 550-foot perimeter around the fireworks barge that will be enforced by marine officers.

In anticipation of a large number of spectators, Beach Boulevard from Oliver Street to Westwood Street (including City Park Street) will be closed to thru traffic from noon until after the fireworks show.

Visitors are advised not to park illegally (on private property or roadside) on Washington Avenue. Please do not block driveways or parking lots because cars will be towed.

Here are some rules provided by the City of Pascagoula to stay safe and happy before and during the show: 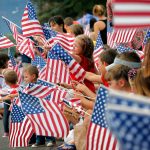